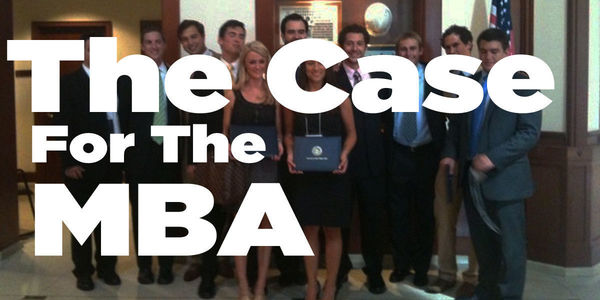 Aaron Patzer, founder of Mint, has said, “When valuing a startup, add $500k for every engineer, and subtract $250k for every MBA.” It turns out this sentiment is not a new thing in the Startup community and has been going around for a few years. Technical folks are seen as more valuable partially because they cost less, and because great tech folks are a harder to find; working against the norms of supply and demand. So, are there reasons to choose an MBA to run your startup?

To begin, MBAs haven't always been shunned by the startup community. In fact, up until the late 90's nearly all the CEOs for startup companies were MBA's - from Stanford MBA, John Morgridge of Cisco to UofM MBA David Bohnett of GeoCities.

During the dotcom age startups could not get enough of MBAs, and those with MBAs knew that. They were the Wall Street Execs of the New York 80's, MBAs ran Silicon Valley. Instead of searching for jobs, MBAs, especially from Stanford at the time, came to startups with lists of demands and salaries to match. In addition, many of these new MBAs had very little to no business experience other than textbook work, so, when it came to actually running companies, many of the new startups were ran into the ground by these recent grads. This, along with the end of the dotcom age, led to the fall of the MBA in the startup community. Shortly after (5-10 years) this period the startup community would usher in the new "tech ceo" age.

So is there a way back in for MBAs?

The world is obviously much different than it was in the 90s, MBAs have had to adjust to new economic environment. Once MBAs began feeling this backlash they had to quickly realize they would no longer be able to list their demands but would have to go back to searching for jobs, like other Masters graduates.

In addition, the curriculum is also much different than it was about 20 years ago - companies are smaller, more nimble and easier to create inside of a classroom environment. We see programs like the ESTEEM program at Notre Dame popping up and teaching technical people how to create small startup businesses, as a way to create a hybrid student - tech and business. These hybrids might be a sort of middle ground, tech ceos with masters level hands on business experience.

So how can the MBA market themselves?

As pendulums swing they often begin settling toward the middle over time. We've already seen the world with the overly powerful MBA and now, with this current anti-MBA sentiment, we might have over corrected. MBAs still have much to offer that the tech grad doesn't have: high level perspective.

Tech folks tend to look at the product as the end-all-be-all of the business instead of understanding the market or the end consumers. MBAs have been trained at understanding how to identify markets, manage teams and monetize the product. Which just happen to be some of the most important things for tech investors.

So, while MBAs are currently the scourge of the startup community, it hasn't always been that way, and it likely won't be that way for much longer.

What do you think? Are MBAs on their way back or have they gone the way of the buffalo?