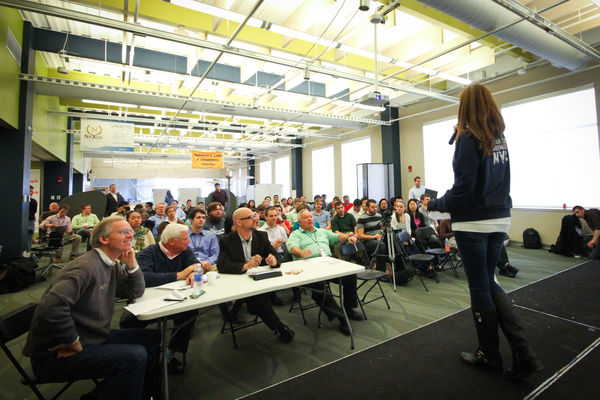 This past weekend's Startup Weekend Notre Dame was incredible - nearly a hundred people brought their skills and entrepreneurial spirit to Innovation Park and pitched over 25 new startup ideas, the "Weekend Warriors" whittled it down to 11 and after three long days the judges chose the top three startups. So, now that it's over, what were the take aways?

The Startup Scene is Alive in Your Hometown: As we noted in a blog post during Startup Weekend, great startup ideas can be found in your hometown! Beyond that, there are tons of people all around you that are willing to put in time and effort if you have a great idea. You don't have look on the coasts or toward huge cities to find great folks to work with. A side note is that, of the three top winners, two were ideas that came from Notre Dame students. Both, top prize winner CitiLoco, a mobile itinerary app, and the second place winner, Classery a platform that allows for hobbyists to teach each other and learn skills in an interactive way, or as they call it "a concierge of knowledge", were ideas that came from and were built by Notre Dame students (CitiLoco coming from ESTEEM student Shane McCarthy). It just shows that ND has great knowledge, great technical skills and business education to help our students come up with and create these awesome ideas!

Overnight Success Through Hard Work: The ideas that came out of Startup Weekend, whether they won or not, progressed in a way that was incredible to watch. Usually it takes months or years to get a product from idea to market, all of the winners were able to get nearly to that point in 54 Hours! It took a huge amount of effort but it was awesome to see every group finding competitors, talking to their customers, creating and reinventing themselves when they ran into hiccups.

Selling Your Idea is Half the Battle: One thing was apparent if you looked at the different teams, the top three teams had the largest number of people. It isn't cheating, it just speaks to the level that the creators were able to sell their peers on the idea. The more you are able to sell your team on a great idea, you are likely to create a great group that wants to help turn this great idea into a great product.

Create and Iterate: Not one project started the same as it ended this weekend. The teams worked tirelessly understanding their market, their competition and their customers, and, at every turn, if there was an obstacle, they pivoted. The Gold Cup idea started out as a screen on a cup and turned out to be a fully functional reward and loyalty program that is going to be talking with corporate Starbucks… It was incredible to see some of the pivots and how teams were able to completely reinvent themselves when their ideas ran out of steam.

It was an incredible weekend with speakers like Dennis Boyle the Co-Founder of Ideo, the creator of Cookbook Create, Anna Curran, and mentors from Notre Dame and all over the country. It was a great weekend for networking, creating and expanding peoples minds to what you can do in a weekend!