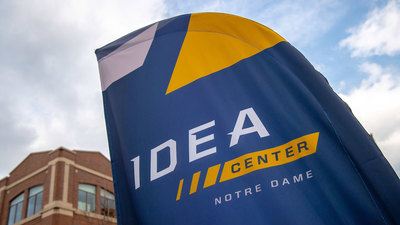 The IDEA Center is housed in Innovation Park on Notre Dame's campus.

The benefits of entrepreneurship are well documented. Startups are responsible for nearly all net job growth in the United States, experience growth rates substantially higher than other businesses, help eliminate poverty and have an outsized impact on overall economic productivity and gross domestic product. Despite this, entrepreneurship and venture capital have been largely closed to minorities, with African Americans impacted particularly hard.

African Americans make up approximately 13 percent of the U.S. population, yet only 2.2 percent of small businesses are owned by them. By comparison, whites make up approximately 60 percent of the population but own 82.5 percent of all businesses. Black-owned businesses are also valued eight times lower than white-owned firms and their annual revenue averages nine times less than white-owned businesses. Compounding this is the fact that only 1 percent of venture capital dollars go to Black entrepreneurs. All of this has helped contribute to our economy's growing inequality.

The IDEA Center will host a webinar conversation from 1 to 2 p.m. June 30 on how to break down systemic barriers around African American entrepreneurship. More specifically, our panel of speakers will discuss what barriers exist for Black entrepreneurs (and why), what needs to be done to increase Black entrepreneurship, how models of Black entrepreneurship might look different from what traditional models expect, current examples of success and how Notre Dame, other universities, investors, politicians and attendees of the webinar can support these efforts now.

This webinar will feature Philip Gaskin, vice president of entrepreneurship at the Ewing Marion Kauffman Foundation; G. Marcus Cole, the Joseph A. Matson Dean and Professor of Law at Notre Dame Law School; Andrew Welters, CEO and partner at 5Lion Ventures; and Bryan Ritchie, the vice president and Cathy and John Martin Associate Provost for Innovation at Notre Dame.

Register for the webinar here.

Originally published by Nicholas Swisher at news.nd.edu on June 23, 2020.