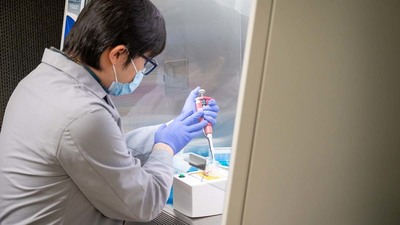 The hero in Mary Shelley’s “The Last Man,” her second sweeping political science fiction after “Frankenstein,” is left alone in Rome, in a post-apocalyptic world. A global plague apparently took the lives of everyone else, yet he discerns a duty to forge ahead, no matter what.

Published in 1826, the novel mirrored Shelley’s life as she despaired at the loss of several of her loved ones. Her sister Fanny died by suicide. Her husband, the poet Percy Bysshe Shelley, drowned after a sailing accident. She lost another friend, the poet Lord Byron, to infection. Two of her toddlers died — one of malaria, and another from a fever. She kept a kind of plague journal, according to Eileen Hunt Botting, a professor in the department of political science, “in order to fight fatalism.”

“She found the courage to persist by writing about the reasons why she had an obligation to continue in this world, and serve in this world, despite the tragedy,” says Botting, whose book, “Artificial Life after Frankenstein,” will be published later this year. “At the end of Shelley’s novel, we find this powerful image of the seemingly last surviving human looking for other survivors, even as he sometimes doubts he will find them.”

As Notre Dame’s laboratories went into hibernation in March, many researchers from various fields — chemistry, engineering, political science, psychology, education — looked for ways to pivot their own work toward furthering knowledge into how COVID-19, the disease caused by the SARS-CoV-2 virus, works, how it’s transmitted, and how our country and world can cope with the unexpected pandemic crisis. They decided to jump into the research at different times, but for the same reason: They knew they could help.

Originally published by Deanna Csomo McCool at news.nd.edu on June 15, 2020.