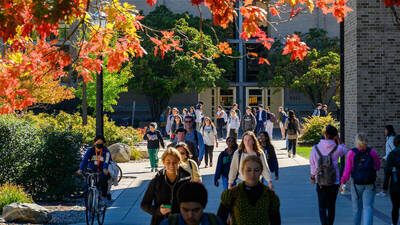 Meet Jack O’Meara, Ashley Kalinauskas and Dan Kervick, founders and CEOs of three companies, each having a profound impact on the world. They have one thing in common: All are graduates of the ESTEEM Graduate Program, a one-year professional master’s program at the University of Notre Dame that confers a master of science in innovation, technology and entrepreneurship.

From the minute O’Meara, a native of Ireland, heard about ESTEEM, he was eager to apply. The self-described quirky young man has always been entrepreneurially minded and wanted to combine his interest in biomedical engineering with entrepreneurship. O’Meara was accepted into the program in the spring of 2015 and was soon on his way to South Bend.

“The ESTEEM program is a perfect marriage between biomedical engineering and business,” he said. “The speakers that came to visit, the program’s curriculum, the focus on real-world through the capstone project offering and the overall structure had a profound impact on me and ultimately influenced my decision to start Ochre Bio.”

Ochre Bio is based at Oxford University. The startup focuses on developing RNA therapies for chronic liver disease with the goal of reducing the need for liver transplants. In 2020, the company was accepted into Y Combinator, the most prestigious startup accelerator in the world. It has since raised a $30 million series A, secured in October to support the ongoing development of its chronic liver disease therapies.

Like O’Meara, ESTEEM shaped Kalinauskas’ desire to learn more about entrepreneurship and how to integrate it into her career path. “I was attracted to ESTEEM because it combined my love of science with my interest in expanding my knowledge of business and entrepreneurship,” she said.

The hands-on entrepreneurship program led Kalinauskas to co-found the startup Torigen Pharmaceuticals, a veterinarian biotech firm developing new, more affordable cancer treatments for pets. Her idea for the company results from her ESTEEM capstone project with Mark Suckow, a former faculty member and veterinarian in the College of Science at Notre Dame. The two began exploring the technology of bringing a personalized cancer vaccine to market for dogs, cats and other companion animals such as horses.

This technology is based on Suckow’s research on developing vaccines derived from tumor tissue to create personalized vaccines for human cancer patients. Kalinauskas saw the opportunity to leverage the same technology for animal patients. Believing in her startup, formed during her capstone project work with ESTEEM, she decided to participate in the McCloskey New Venture Competition, an intense, nine-month exercise in entrepreneurship for Notre Dame students, faculty, staff and alumni. Kalinauskas’ success in the competition — she won second place overall and earned $5,000 in prize money and in-kind gifts — helped her to realize that she had the foundational knowledge and experience instilled by ESTEEM and the incredible network of Notre Dame faculty, researchers, mentors and alumni needed to launch a company. In October, Torigen completed a $13 million series A1 round and will use its new capital to scale its impressive footprint of customers and to develop new products for the veterinary market.

Unlike Kalinauskas and O’Meara, Kervick entered ESTEEM as an already active entrepreneur. He is the founder and CEO of Flagship Management Inc., which manages capital equipment for physical therapy offices while providing enterprise-level data. In the program, Kervick continued to run, advance and scale his startup. While the company was doing well, Kervick wanted to scale it nationally. He realized that he needed to know more about how to truly think through the daunting challenges of scaling an enterprise but was reluctant to jump into any graduate educational experience that was too academic, too much focused on theory alone. Then he learned about ESTEEM.

“What attracted me to ESTEEM was its convergence of business, science and technology — and the fact that it was very focused on applied and experiential learning; that we would actually ‘do’ entrepreneurship and not just study it,” he said.

Having a highly decorated career in the United States Navy, hiring military veterans continues to be a core focus for Kervick — more than one-half of his current workforce served their country — and while in the ESTEEM Program he took on more entrepreneurial roles with a capstone project for Booz Allen Hamilton that focused on the impact of emerging technologies on the intelligence community.

While in the program, Kervick connected with Notre Dame alumnus Nate Bard, chief growth officer for ATI Physical Therapy, and set up a meeting to explain Flagship’s business model.

“I took a chance and Nate liked what I was doing,” he said. Months later, ATI became one of Flagship’s most important customers.

“You learn what an entrepreneur needs to know from all of them,” he said.

Kervick, Kalinauskas and O’Meara each found success through and because of ESTEEM. Exposure to real-life business ventures and the opportunity to develop and enhance their entrepreneurial mindset and skill base, combined with their technical backgrounds in the social sciences, science and engineering, have provided each of them with the know-how, confidence and connections to start, capitalize and scale companies — precisely what one would expect from a top-ranked graduate entrepreneurship program.

Originally published by Olivia Poole at news.nd.edu on November 30, 2022.