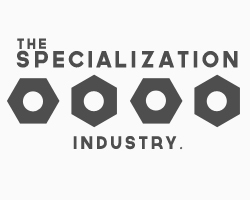 Plato was one of the first who spoke of the division of labor saying, "How will our state supply these needs? It will need a farmer, a builder, and a weaver, and also, I think, a shoemaker and one or two others to provide for our bodily needs. So that the minimum state would consist of four or five men…." The division of labor is a method that caused incredible amounts of productivity, and was brought to a new level with Henry Ford's assembly line in the early 1900's. Ford's assembly lines, although first conceived by Adam Smith and first used by Eli Whitney, perfected detailed division of labor, where individual interchangeable parts, made from different companies, were brought together in the assembly line to produce one final product. It has since been seen as one of the most efficient processes in mass production. It is a method we still see today in many of careers even if we are not in the warehouses; instead of having one person who knows how to do accounting, IT and sales we have divided those skills - but are those divisions falling?

In an earlier post we discussed the idea of the "unicorn", the CEO who has both technical skills and business skills. It's a rare, almost mythical creature but it's becoming more of a necessity for businesses. For example, the graphic designer for a small company often has to know how to create graphics, edit pictures, understand simple coding and many are being tapped to be in charge of the company's entire online marketing. In some instances it is because the skill sets are often related, but, in other instances, we are also seeing more employees being "cross trained" to understand many aspects of how the company works. With the inventions and efficiencies of the industrial age, we saw companies grow to massive scale and put out massive amounts of "things" with many individual jobs shrinking to very specialized and often unskilled positions. However, since this age we've moved into a new lean startup age. Instead of having huge companies, you have companies with only a few employees - with large increases in freelance workers. However, what this means for many, is that the days of highly specialized business owners and employees are gone.

With decreasing workforces due to a drop in manufacturing and shrinking budgets, we've also seen the amount of freelancers sky rocket since the 1990's to 1 in 3 workers working in some form of freelance. This often means, while freelancers work in a specialized area like marketing or law, they often have to expand their skill sets to fit the needs of their clients. The clients are often shops that have shrunk their workforce and now have to outsource these jobs because they want their internal team to be as lean as possible.

What this is leading to is an army of well-rounded employees, which happens to be a really good thing for our workforce. Our skills sets have been broadened to help us find jobs in this new economy, however it does mean, now that many people can handle more than one job at a time, potentially less jobs overall. So it becomes more of an asset to have multiple skill sets, for example, back to the "unicorn CEO" - there are plenty of people who know about technology or engineering or other highly specialized skill sets, but the pool shrinks much smaller when you look at people with the "unicorn" type skill sets who can balance both their tech and business understanding.

What do you think? Are we still a highly specialized workforce or is a more rounded workforce better?  Let us know in the comments!