By now, you have no doubt heard of Amazon.com’s proposed idea of using drones to deliver packages that you order on their website to your front door. If not, here is the video, which raked in 7.5 million views in 2 days, introducing Amazon Prime Air to the world.

Jeff Bezos, founder and C.E.O. of Amazon, recently went on 60 Minutes to talk about this novel idea, among other exciting and innovative things that the shopping portal is involved in, including Amazon Fresh, a means of ordering your groceries online, and Amazon Web Services, which hosts on its servers and in the “cloud,” a fairly large portion of the internet. 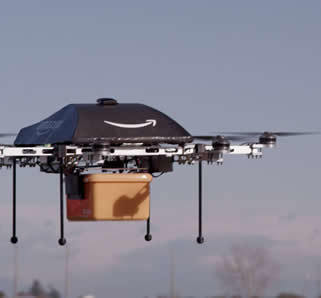 All anyone seems to be talking about from Bezos’ conversation with Charlie Rose, though, is Amazon Prime Air, and it’s not hard to see why. While Bezos’ timeline of having these drones actually delivering products within five years seems overly optimistic, the idea of them flying through the air at all is unprecedented and seemingly futuristic in nature, and that is why the concept, no doubt, has caught fire and piqued the public’s interest.

That being said, the reasons why we won’t see Amazon drones flying through the air anytime soon are numerous in nature and easy to spot for anyone familiar with robotics or a similar area of expertise in science or technology

The Verge, for instance, points out the problem of battery power. Per their article, “Here are the three things Amazon needs to get its delivery drones off the ground”...

“Amazon has said that its unmanned aerial vehicles [UAVs] should be able to carry a 5-pound package up to 10 miles within 30 minutes...Octocopters on the market today are often built to carry cameras heavier than 5 pounds, but they fly only a fraction of the distance; the SteadiDrone EIHG8, for example, is meant to carry between 2 and 13 pounds, but only for a maximum of 15 minutes and less than 1 mile — the heavier the package, the worse the performance."

The article goes on to question on what would stop the theft of packages delivered via this method and how well these drones would work in densely populated areas. Not to mention the possibility that the Federal Aviation Administration may not even grant its approval to such an idea. Still, Amazon Prime Air is a compelling concept and conducive to our continuing curiosity going forward.

What problems or possibilities do you see with Amazon Prime Air? Is it practical or even feasible? Would you order something from Amazon this way? Why or why not?