Angel himself is no stranger to the international lifestyle. Born in Panama to a military family, he grew up across three continents before deciding to join the U.S. military at 21. Angel always had a mind for moving up—through his 9 years in the Air Force he went from working in public affairs to flying on EC-130 airplanes as an airborne maintenance technician. After the military, Angel attended Illinois State University, where he earned his Bachelor’s degree in Renewable Energy. 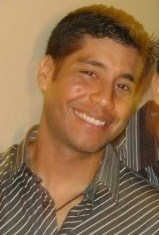 “That’s where the future lies,” says Angel. “Nothing in this world moves without energy.”

It’s fitting, then, that his Capstone Thesis Project should involve movement—both the minute physical movements of a building in response to its environment, and the transmission of data that measures this and other aspects of a building’s structural health.

The structural health of a building is determined by a network of sensors, including accelerometers, weather stations, and even GPS devices, all of which measure the effects of seismic and wind events as well as other environmental factors. Each sensor records data from a different area of the building, and when this data is processed, the result is a comprehensive, real-time analysis of the different stresses going on in a building at any given moment.

Dr. Kareem’s SmartSync technology solves the issue of data transfer in existing structural health monitoring systems. Other monitors depend either on a wired or wireless data transmission, each posing their own problems. Wireless systems are riddled with line-of-sight issues, owing to the building’s walls getting in the way. Wired systems can be not only expensive, but since the wire itself acts as an antenna, they also introduce noise into the data.

“The difference with SmartSync,” says Angel, “is that it harnesses the power of the building’s existing LAN structure to allow data to go back and forth.” The result is a data transfer that is not only more economical, but far more efficient. Preventative actions can be performed immediately in response to any issues that are detected, and buildings can be monitored either remotely or on-site.

Which means that even here at ESTEEM headquarters at Innovation Park, Angel can monitor data that’s being recorded on a building halfway around the world. An amazing feat, especially considering how that data also has research applications as well.

“A lot of times researchers design models on computers, but no one knows how tall buildings will react when you actually build them. The data we record can be compared with that of computer models to validate what the computers are figuring,” says Angel.

If that’s the case, SmartSync technology will be an absolute necessity should anyone attempt to build a tower higher than the Burj Kalifa. But as for now, how does it feel to be working to commercialize technology that’s currently in place at the highest point mankind has ever constructed?

“It feels like I’m a part of something bigger than myself,” says Angel. “That’s something that I’ve always strived for.”