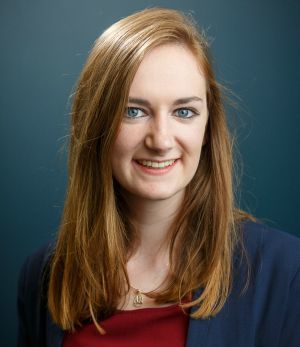 During Fall Break, 6 ESTEEM Students traveled to Las Vegas to participate in SAP's TechEd Conference.  In this piece, ESTEEM Student Jenny Lardner reflects on the experience two of them had as part of the Keynote.

When I started the ESTEEM program back in June I never imagined I would spend my Fall break attending a Tech conference in Las Vegas with Professor Sunny Shah and other Esteem colleagues. I certainly never expected to ever be a keynote speaker at a conference for one of the biggest software companies in the world. This week, I’ve done both.

SAP University Alliances invited Stephen, Sunny and I, to speak at the SAP TechEd Keynote on findings that were made using SAP and Indiana Crash Data given to the ESTEEM Data Analytics class six weeks ago.

Having checked-in to the Palazzo Hotel on Monday morning, Sunny, Stephen and I were summoned straight to rehearsals. Backstage was surprisingly calm with free food on tap for us hungry travellers. Decisions were made over which plots and graphs to put up on the big screens while we spoke, and then we were called on stage.

The rehearsal was great fun, Steve Lucas put us all at ease, and we practiced what we planned on saying. Five thousand empty seats were not intimidating. 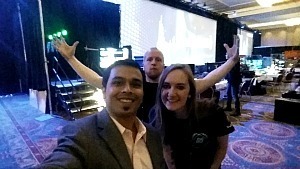 Next we moved on to hair and make-up. The make-up artist was lovely. She told us she has done make up for Tim Cooke, CEO of Apple in the past! She made sure Sunny, Stephen and I got airbrushed to avoid any shine on stage. Sunny even took his first selfie.

The Keynote began at 6pm - nerves were kicking in - but there was an air of excitement. Steve Lucas, global president of SAP Platform Solutions led the event with CEOs, founders of massive corporations, and small start-ups, showing how beneficial and instrumental SAP platforms have been to their organizations. Frantic texts and emails were sent around telling us that they were over time and to keep our part short. The time came and we were called on stage. Five thousand no longer empty seats were terrifying! 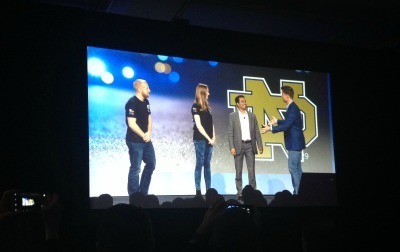 Gleaming lights blocked the audience from view as Steve asked us about the ESTEEM progra, and the connection with Notre Dame and SAP. He wanted to know how Stephen and I had been chosen to speak and what work we had been doing on the collision data from the State of Indiana. Next Gen Consulting is an initiative between SAP and universities to enable learning and understanding of SAP software by students. In our case we dealt with real data that was analyzed, and our findings were ultimately taken on board by the Indiana State Police Department. Steve asked about our discoveries and Stephen and I spoke about findings we had made in relation to where crashes occur, whether roads had street lights or rumble strips, and what gender people in different crashes were. The 7 minutes on stage flew by, and a number of people came up to us afterwards and commented on how interested they were in the University Alliance with SAP and Notre Dame. An engineering consultant from Target mentioned our piece in the keynote “Made his day!”

The evening was finished off in style with a VIP party and a Next Gen gathering with some unforgettable cupcakes.

It was a truly amazing experience, Stephen and I are so grateful to have been a part of it, and would like to thank everyone who made this opportunity happen.

A link to our SAP TechEd keynote can be found here.