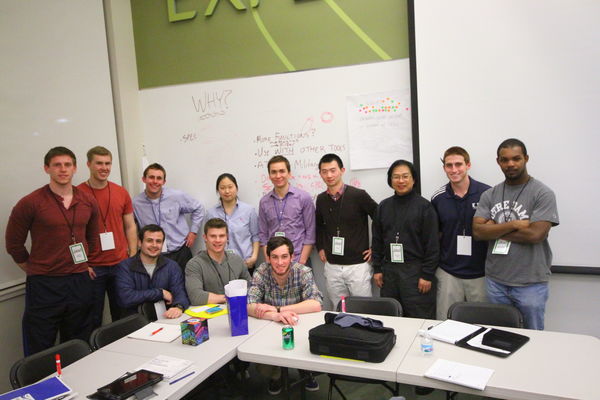 Chris Godsoe is a father of four and, much to the liking of his wife, loves to clean. While he was cleaning he had found a group of ants under a chair and started vacuuming them up, but he didn't know if there were more - he couldn't see. So he grabbed a Maglight and taped it to the end of his vacuum tube and found the rest of the ants… but he knew there was a better way of doing this and that's Vaclight.

Godsoe, said he has been coming up with ideas for years, "before coming to Startup Weekend, I had dozens of ideas. This one is actually one of my middle of the road ones. I wanted to bring this idea so that in case it didn't get picked I wouldn't get too down…". However, after 1 day of prototyping and brainstorming with his team, the idea had evolved from a light on a vacuum to a sleek vacuum attachment that got all the Startup Weekend attendees excited - although that might have been partially due to the three electrical engineers working with solder guns on the floor.

This South Bend resident and serial inventor says he is not exactly quitting his day job, but he did say that this experience has completely changed the way he thought about inventing. "I don't have the money or the technology to do these projects, but after this weekend you sort of realize that this is still completely attainable."

As we start the last day of Startup Weekend, Chris and his team have already sold 4 of their prototypes; one of them to Ideo partner Dennis Boyle. What has them increasingly excited is that they are starting to national attention, Shark Tank participant LiddUp, a cooler lighting company, reached out to them last night on Twitter. Godsoe said, "Now I guess I'll have to have my 10 year old teach me how to use this Twitter thing".