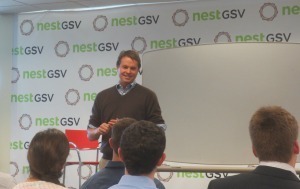 Monday came with a more full schedule for the ESTEEM students. First thing in the morning, we traveled to NestGSV. The GSV stands for Global Silicon Valley – their goal is to bring the culture and attitude of Silicon Valley to other parts of the world. They serve as an incubator for companies both international and domestic, referring to themselves as an "eco-bator" because they bring together government, corporations, communities, and other entities to drive collaborative thinking and innovation. The founder and CEO, Mr. Kayvan Baroumand, along with COO Kathleen Policy, led us on a tour of the campus, which boasts large open collaborative spaces, a gym, and even a slide from the second floor to the first! We spent the majority of our day listening to different entrepreneurs share their experiences and bits of advice for our future endeavors.

First up was Tim Connors, founder of Pivot North Capital, who spoke on unit economics. He said entrepreneurs’   failure to understand unit economics is a major reason that ventures fail. Connors really stressed the importance of unit economics in all business ventures. He analyzed one student's thesis project so we could see an illustration of the concept with a familiar example.

Next was Rich Kaizer of Cloudera, who spoke about the need for occasional risk-taking to drive success. He also contended that sometimes risk-taking involves not only ourselves but also those around us, citing several examples of risk-taking in his own career that yielded high rewards for himself and his family. 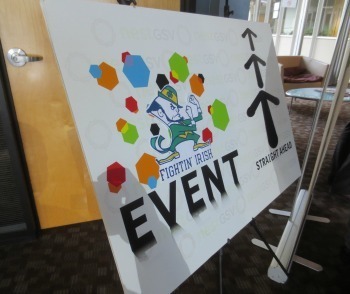 After a brief lunch break, Tim Zanni of KPMG spoke about leadership. One of his main points involved sticking to personal and company values regarding ethical conduct: "Do the right thing the right way." He also cited four company attributes required for happy employees: 1) they need to feel like they're working for a winner; 2) they need to like what they do; 3) the management needs to treat employees well; and 4) employees must feel like they can get a job done without pulling their hair out!

Following Zanni, Dr. Sam Haddad, President and CEO of HTC Services, spoke to the class on why Silicon Valley is the place to be in the business world. He stressed the unparalleled educational environment, the innovative culture, and the abundance of resources for budding entrepreneurs, such as nonprofit incubators.

To wrap up our day at NestGSV, we heard Ben Holbrook describe his experiences with his Level One Leasing Call Center venture. He told us how he grew a back-of-the-napkin idea into a multimillion-dollar company, but his success was not without challenges from unforeseen struggles. He also mentioned that a less attractive industry might be the best to place to do business because others are more likely to overlook it. 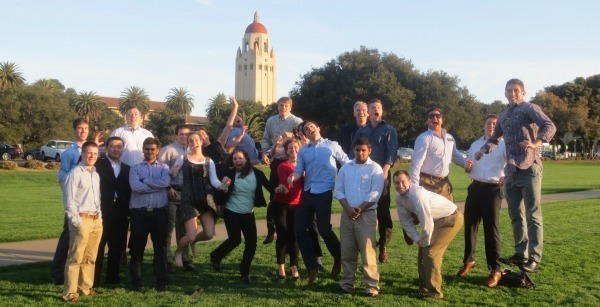 From there, the class ventured to Stanford University, where we listened to a lecture in a European Entrepreneurship and Innovation class taught by Dr. Burton Lee. The lecture focused on streaming- and user experience-focused startups. Gyula Feher, founder of Ustream, and Marcin Treder, founder of UXPin, gave their accounts of heading start-up ventures in Europe. They compared and contrasted the European experience with Silicon Valley. Gaining these global insights on entrepreneurship and innovation was a great way to bring full circle a day that started with learning about NestGSV's goals to expand Silicon Valley's culture globally.

After dinner at Gordon Biersch Brewery, the class unwound with ice cream and milkshakes as we shifted our focus to our shadowing day coming up on Tuesday.