Sean McGee is reporting from ESTEEM’s Spring Break trip to Silicon Valley each day this week. 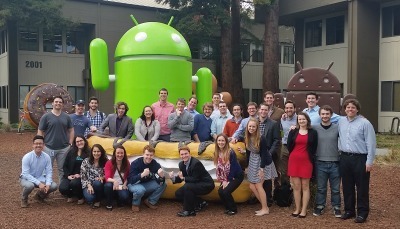 We had lunch in San Francisco at West of Pecos, a restaurant run by a family of Silicon Valley restaurateurs. Then ESTEEM alum John Flatley led us on a tour of Google including the Google Garage, their hacker space and prototyping shop equipped with 3D printers.

Later, we attended the Notre Dame California Initiative launch party and networking event at the innovation center GSVlabs. We had a late dinner at In-N-Out Burger, the first time that many of the students had experienced the famous regional restaurant.