ESTEEM 2015 alum Michèal Lyne talks about the highlights of the bus adventure.  Michèal will be joining Deloitte in Houston in a few months.

Having completed our journey on the SerendipitiBus one question that everyone always asks us is what was our favourite moment or best destination of the trip. I thought I would delve into the highlights of the journey from my perspective and pick out a few times to illustrate what we got up to along the way. 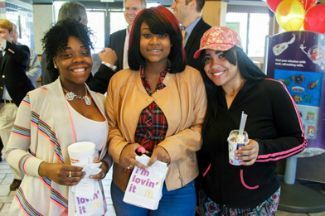 The first moment of significance which struck me was the morning of the South Bend 150th anniversary launch. As we obtained sponsorship from McDonald’s (among others) one of our obligations was to roll into small town restaurants around the country and purchase free meals for their hungry customers. On the morning of the first trip to McDonald’s, South Bend’s Mayor, Pete Buttigieg, was gracious enough to join us for the celebration and a number of local news teams were also on hand to document the event celebrating the start of South Bend’s birthday festivities. While the team got to work behind the counters passing out free meals one of our crew, ESTEEM alumni, Nick Kyratzis interviewed customers to gauge their reactions to the bus and the free breakfasts! In the course of this Nick spoke to a diverse mix of South Bend’s citizens. Afterwards he mentioned how performing customer interviews through our classes in ESTEEM such as Business Model Canvas had become second nature. The skills and empathy developed through participation in ESTEEM and the McCloskey Business Plan Competition was a huge asset to him outside the classroom on the Serendipitibus. One woman spoke of the rather sad circumstances in which she had recently lost her job. She was extremely grateful that some college students were giving out free meals. As a team we really didn’t expect to make such an impact through the Serendipitibus, the fact that through our sponsors such as ESTEEM and McDonald’s we had made this woman’s day easier during a tough time in her life was enormously powerful. Ask anyone on the Serendipitibus and they will tell you that aside from all the fun we had along the journey, moments like this where we went some small way towards improving someone else’s day were hugely rewarding. 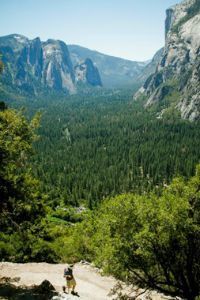 Another day on our travels that is often cited as our favourite was the adventurous 14 mile hike across the mountains of Yosemite National Park in California. We set off from our campsite in the morning to hike to Glacier point a well known viewpoint from which to survey the infamous Half-Dome across the valley. It was an extremely hot day and the arduous hike was tiring but provided sublime views of the pristine National Park.

By the time we reached the top we were eager to tuck into our premade sandwiches and relax while we took in the views of waterfalls and forests surrounding us. After lunch and stocking up on water we set off again down the Panorama Trail. Unfortunately we got separated while exploring and as the evening set in half of us were gathered at the far side of the mountain wondering whether the others had taken a wrong turn. Temperatures can drop quite suddenly after sunset so we resolved to go back and look for the missing team members. After a short search we found them and once again set off in the gathering darkness to reach the bottom before the shuttle busses stopped running! This day/night was some of the most fun we had on the trip as we meandered down the trail through sunset and into darkness. As we slowly crept down “Mist Trail” the scenery was like something from Lord of The Rings with the deafening echo of the waterfalls behind us and the mist streaming across the steps in front of us, with the ambient light provided by the moon finishing the scene. Eventually we reached the bus stop and collapsed into our seats. What started as a daytime hike had progressed to an 18 mile trek. Not your average walk in the park but certainly a memorable day on board the bus! 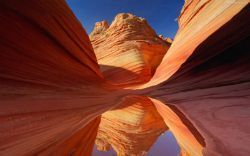 It is very hard to pick out the highlights of such an amazing journey but I think it would be remiss of me not to mention the fun our team had on Lake Powell. We arrived at the park in the middle of the night and parked up to get some rest before a great day ahead on the water. Unfortunately for us we hadn’t exactly planned ahead expertly and all the boats were already rented out. As six of the crew on the Serendipitibus were ESTEEM graduates this inconvenience was a mere logistical challenge to be overcome. Throughout the year we had become very used to dealing with ambiguity and coping in situations where no obvious solution presents itself. We decided to split up the tasks and each set to work organising how to salvage our two planned days on the water. With some great negotiating skills from Nick Machesney and Rory they managed to arrange a boat from a provider a town over. While they were tackling this Amy and Samantha had arranged to rent a U-Haul truck to get our boat to the lake and back in one piece. With the problems solved we hit the lake to enjoy ourselves and bask in the heat of the Arizona/Utah sun (Lake Powell is shared among the two states, and two time zones!). Lake Powell was amazing to witness and with thanks to our generous power boat operators, Amy, Rory and Nicko we got to explore the infamous Antelope Canyon (you might recognise it as a Windows background).

As Rory alluded to in his previous Blog post the SerendiptiBus journey, from inception to completion was very similar to our year in ESTEEM. It was challenging, rewarding and we were constantly surrounded by fantastic individuals who spurred us to achieve more than we thought possible. In the end the entire year has been one of the most fulfilling of our lives and we wouldn’t change our experiences in either for anything.