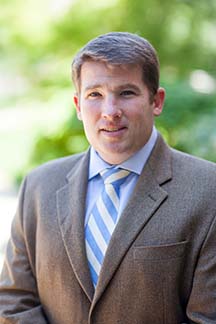 When Shawn Cook’s Army assignment officer announced that he was selected to go to graduate school again, Cook, who had already earned a master’s in geological engineering, started thinking about what could serve the country as well as position him for life after his 20-year military career. He chose ESTEEM.

“One of the first schools I called was Notre Dame,” Cook says. “I’ve always thought Notre Dame was one of those top-tier schools that does a great job of combining academics with collegiate sports you can be proud of. Everything kind of aligned with this program. I’ve always had in the back of my mind a desire to start a business.”

That’s what Cook did while in ESTEEM. In addition to his capstone thesis, helping Serim Research Corporation of Elkhart market its homemade explosive (HME) detection kits to military and law enforcement agencies, he launched Lineage, a networking platform for families to share their videos, pictures, and stories beyond the bare facts of other online genealogy services. His team, with three ESTEEM classmates, has advanced to the second round of the McCloskey Business Plan Competition and won a grant from the Schurz Innovation Challenge for the South Bend Code School to build its website.

“The idea behind it is for a family networking site where you can store videos and photos in real time,” says Cook, who interviewed his grandmother during the Christmas break and gained new information about the family, including a previously-unknown Swedish great-grandparent. “All that history will pass on to your children, or whoever you would want to pass it on to. You have a place now stored on the Internet where you have all this family history. You’ll have that for your children and your grandchildren.”

At his wife Nicole’s suggestion, the site also hosts favorite family recipes, and other features will be added. Cook’s own account includes a picture of his 5-year-old son Quinn meeting his brother Connor, born a week before ESTEEM classes started. When he conducted his own sort of Business Model Canvas, Cook discovered that the market for the site ranges from young families like his to people in their 60s. Older people seem less eager to promote their own stories, and younger people without children have not yet gained deep appreciation for preserving family stories.

“Too often you sit back and think ‘I’ve got this great idea,’ but have you gone and talked to other people?” he says. “It’s going out and validating the idea, getting information back from those interviews, modifying it to make sure you have a great product. What’s a pain point you have in the area of family history?  A lot of people told me the same thing – ‘Ancestry.com is really cool, but I’d love to hear a firsthand account from my grandfather.’ I think the validation part is the biggest thing on the Business Model Canvas that has helped me out the most – having the hypothesis for my value proposition and going out and verifying that what I have as my value proposition is viable to my customer segment. I bet people would be willing to pay for a subscription to a website where they could upload all this family history.”

ESTEEM provided the perfect setting for moving the idea forward, including classmates eager to join the team.

“The program lends itself to people who would participate in this,” Cook says. “Most if not everybody in my program has the desire to start their own business. Even if it’s not their idea, they want to jump on someone else’s team. I’ve loved it here. The school itself has been great, the professors, the program. They have been extremely helpful with everything. It’s exactly what it says – take aspiring entrepreneurs with a technical background and give them the tools for successfully starting a business. I feel pretty confident now about starting my own business.”