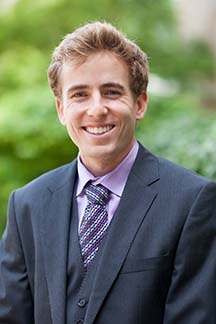 Cole Cravath came to ESTEEM determined to seize every opportunity that came his way. With just a year in Notre Dame and South Bend, there is no time to procrastinate.

“What’s cool about ESTEEM is it’s kind of like all or nothing when you’re there,” says Cravath, who figures he missed opportunities as an undergraduate at Boston College because he put things off for senior year. “You’re part of it, and you’re given a lot of opportunities. Every time one of them crops up, I say, ‘I can either do this or not do this, but I’m not going to have an opportunity to do this in the future.’ I only have one opportunity to do this, and that’s now. I think that stems over into a lot of different sorts of activities, even small social engagements. There might be a networking event with just a few people from the community. I might have been tempted to stay home that night. Because I really have only that one year, I’m going to go.”

Cravath, who spent a year back home in Arizona after he graduated from Arizona with a biochemistry and economics major, is conducting a capstone project on an early-detection cancer diagnostic tool using technology developed by his science mentors, Notre Dame Professor Crislyn D’Souza-Schorey and James Clancy, a postdoctoral research associate in her laboratory. “I really wanted that component that had the science,” he says. “The potential is massive because if you’re able to detect cancer earlier than normal, your chance of curing it or its going into permanent remission is far greater.”

Cravath took a business plan based on his capstone thesis to the Cardinal Challenge at the University of Louisville in February, with team member Michael Curtis, who is earning a J.D. and Ph.D. The company, Small Volume Early Malignancy Exam (SVEME), advised by Gaylene Anderson, is a direct-to-consumer biomedical diagnostic tool designed to identify early-stage cancer. The at-home test analyzes bodily fluids such as urine for biomarkers from microvesicles that can signal cancerous lesions far earlier than conventional tests. Results can lead a person to seek their doctor’s assistance for an increased chance at recovery.

The team was one of 12 invited to the competition among more than 100 applicants from the United States and Canada. Although it did not advance beyond the preliminary round, Cravath says the experience was priceless preparation for the McCloskey Business Plan Competition, where his team has made the final round of 20, and provided valuable insights for revising SVEME’s McCloskey materials. Judges praised his oratorical skills.

“It’s like winning to get in,” he says. “It gave us a lot of insight on how to work on the customer validation process. It took my thesis up a notch. Communicating ideas effectively is such a skill set; ESTEEM has helped with that. I’ve done so many and gotten so much better because they pressed me that way.”

His zeal for the curriculum project is matched by his commitment to service and community outreach. “How can I help my community?” Cravath says.

Among other things, he is working with ProMazo Innovation consulting service, a Notre Dame startup, on a water filtration project for the Whirlpool brand EveryDrop. Cravath, who has a brother with severe autism, also is a member of Super Sibs, a Notre Dame-Saint Mary’s service club. Members mentor children ages 7 to 14 who also have siblings with autism at LOGAN Autism Services in South Bend.