Dustin Mix is a 2013 ESTEEM Graduate and a "Double Domer."  He has taken his Capstone Thesis Project and has - along with two Notre Dame faculty members - created a startup in Haiti.  You can read a little bit about Dustin here.

I’ve tried to learn two foreign languages in my life, the first of which was Spanish. I took three semesters of it in high school, then took a four year hiatus before I took another semester of it in graduate school. I wasn’t particularly bad at it, if getting good grades is any kind of measure. But when it came to communicating to people outside of the classroom that spoke the language fluently, it was a bit of a different story. I could order at the local Mexican taquerìa, but that was about it. 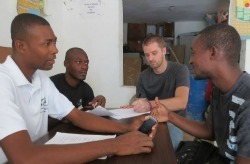 Fast forward a few years when i moved to Haiti. I had spent some time learning the basics at Notre Dame, but really only knew the niceties, how to find a bathroom, and how to find a beer. Enough to survive, but not exactly the skill level needed to implement a new housing technology. But within 3 months, I could get around, within 6 months I could have conversations in the street, and now a year in, I can have meetings in Kreyol and understand and speak enough to get things done. Am I fluent? Definitely not, but I am a lot further along than I ever was in Spanish.

So why is there such a huge difference between my Spanish and Kreyol skills? The answer isn’t tough, and you probably already guessed it: immersion. I learned Spanish from a book and in a classroom. I learned Kreyol in Haiti, through conversations on the streets, on construction sites, over a beer, and so on. As many people will tell you, this is a great (and maybe the best way) to learn a language. Learn by doing.

I’ve been thinking a lot about this lately, and its parallels in entrepreneurship, especially in some of the hot topics of human centered design and prototyping. What I’m realizing is that designing something for a customer, whether it’s housing in Haiti or any other product or service, is a lot like learning a language. We need to speak the language of the customer’s needs, wants, and desires. And the only way to do that is to learn by doing. No amount of reading market research, laboring over CAD drawings, or financial projections can make up for being out in the world, allowing the prototype to grow, adapt, and learn from the customers. Your products will make mistakes. Your products will take things out of context. Your products will say the wrong thing at the wrong time. The key is to make all of this happen before it’s finished, before it’s out there for the whole world to see. While learning Spanish, I made all my mistakes in homework assignments and in a classroom of 20 other people who didn’t speak the language. As I’m learning Kreyol, I make mistakes everyday alongside people that know the language far better than I do. This is what you want your product development process to look like, someone learning a language by immersion, surrounded by those who speak that language the best. 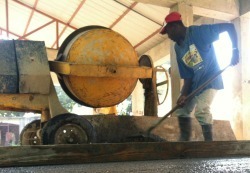 This is why 2015 is such a big year for us. We’ve gone through that process with our housing model itself, but now it’s time to start prototyping the financing program. We have plans to build five homes next year, all of different sizes, each targeting a different income and family profile, and all accompanied by a pilot financing program. We will be tracking and communicating with these aspiring homeowners to understand how our initial financing program works, how it can be improved, and how ultimately we can expand far beyond five homes per year. But it is a process and we are in the early stages. We have a basic vocabulary of household finances, but its time to start learning the nuances, so that we can deliver the housing model that we have spent so much time creating. To this end, we’ve launched an IndieGoGo crowdfunding campaign to allow us to subsidize some of the costs of the homes, as well as to secure the first five loans from a local Haitian bank. If you’d like to contribute to this pilot project, head over to our campaign, watch our videos, learn about our story, and get a lesson in the language of homeownership in Haiti.

My goal is to someday be fluent in both Kreyol and Spanish, but for now, I’ll settle for being fluent in the needs and desires of aspiring homeowners in Haiti. Everyday there is learning happening in our organization, and that is no accident. It’s a product of being out there with those who speak our language the best. They say practice makes perfect. I think the entrepreneurial equivalent is that prototyping makes perfect. And the only way to prototype effectively, much like learning a language, is to get out there and be willing to be corrected.