Sunbeams danced across our faces as we began to rise and orient ourselves from our sleeping arrangements on the living room couches. There was a soft tap-tap-tap as fingers smoothly moved across keyboards. It was 8AM on a Saturday morning, and although we rose with the sun, the employees of Updown were already hard at work.

This past weekend, Jon and I traveled to Madison, Wisconsin to visit his brothers, Mike and Chris Freise. Chris graduated from the ESTEEM program in 2012, and after gathering a few years of work experience at Epic Systems, was itching to relight the entrepreneurial fire that ESTEEM had kindled within him, just as many other notable alumni have done. Back in January of 2015, Jon’s older brothers, along with Jes Greenwood, co-founded Updown Technologies, Inc. with the goal of making the world a more active place. The start-up has developed a smart and user-friendly fitness application that uses a proprietary algorithm to generate personalized workout routines for its users.

Jon and I have learned so much during our time thus far at ESTEEM. Our lexicon has expanded to an alphabet-like soup of acronyms and terms. Through our coursework and thesis experiences, we have been fortunate enough to learn how research and technology can be developed into products for commercialization in the marketplace. Over our spring break in Silicon Valley, we had the opportunity to see a couple of the successful tech giants, Uber and Facebook. It was a pleasant turnaround to witness firsthand a cohort of young entrepreneurs so passionate about their start-up.

Updown headquarters is located in the heart of Madison. The open work environment encourages collaboration amongst the team as was evident by Chris moving from station to station in order to check in on progress. White boards with upcoming goals, key milestones, and progress benchmarks scattered the wall like paintings at a museum. It wasn’t long until Jon’s other brother, Mike, was standing in front of the white board mapping out proposed design layouts for the much anticipated update, version 2.0. 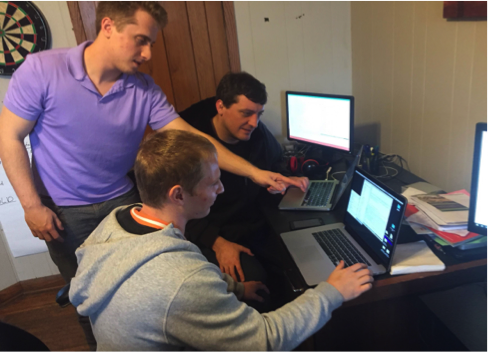 Many have heard the memorable words “Oh, the places you’ll go!” from wise old Doctor Seuss. The children’s tale highlights the exciting possibilities that the future holds. In the world of start-ups, the future is often an unpredictable journey with bumps left and right in the road. From our visit, it was clear that Updown understands this and is ready to face the future head ahead. As Chris noted, “Much of what is important in any start-up is having a clear company vision to guide you through the times of uncertainty.” His words echoed one of the most important themes that ESTEEM constantly highlights in its dynamic curriculum: the importance of vision.

Madison is a youthful college town filled with great restaurants and an exciting nightlife. Saturday night was spent enjoying some of the local libations at the town watering hole. As Jon and I devoured cheese curds and sipped on Wisconsin brews at Chasers Bar and Grille, the Updown crew were deep in a debate about the ideal retention rate of users. They argued about price points and essential features throughout the night. However, they ultimately knew that the answer to many of their questions would not be answered through debate, but instead through customer validation. While Jon and I planned our weekend trip to Madison in order to take a step away from our daily schedule and experience a new city, it was clear that the Updown team, although physically not at work 24/7, never mentally checked out.