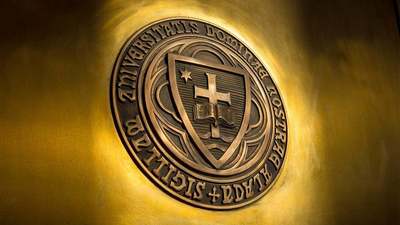 In a letter to the acting secretary of the Department of Homeland Security (DHS), University of Notre Dame President Rev. John I. Jenkins, C.S.C., registered his concerns with proposed changes to the department’s policy that would make it harder for international students to enroll in U.S. universities.

If enacted, the policy would limit international students and exchange visitors to a fixed period of two to four years, with the opportunity to apply for an extension. Student visas under the current policy are good for “duration of status,” meaning students can stay in the United States indefinitely if they remain enrolled in school and abide by rules related to their immigration status.

In his letter to Acting Secretary Chad F. Wolf, Father Jenkins wrote that the change “would be unworkable for most foreign students, including those pursuing post-baccalaureate degrees,” since doctoral programs usually take more than four years and even some undergraduate students need five or six years to graduate.

Rather than force international students to cope with more restrictive approval procedures, Father Jenkins suggested that DHS “judge adherence to the existing policy by examining the records of compliance by students at the American universities they attend or at which they hope to enroll,” adding that such an approach is a “fairer and surer way for your department to protect the national security interests of the United States.”

Father Jenkins also expressed concern about the DHS identification of countries that have “purportedly high percentages of visa overstays,” noting that these are “impoverished countries from which few international students manage to enroll in the United States.” Of particular interest to Father Jenkins was the inclusion of Haiti and the Philippines, where Notre Dame has “special relationships among the poor. While DHS reports that students from each country are more likely overstay their visas, Notre Dame has not found that to be the case.” Of the 1,546 international students enrolled at Notre Dame for the 2019-20 academic year, only one did not have a proper departure record, and he was neither Haitian nor Filipino.

In closing, Father Jenkins wrote that he was “encouraged by DHS recognition that American higher education is the envy of the world” as well as by the “increasing number of foreign students who are seeking degrees from and enrolling in American universities. I recognize that your department is responsible for screening these increasing numbers of foreign students. However, DHS funding should be increased to meet the demand rather than restrict wholesale admission of desirable foreign students to our institutions of higher learning.”

Notre Dame will submit in coming days a formal, comprehensive comment in opposition to the proposed rule change.

Father Jenkins’ letter can be read in full here.

Originally published by Notre Dame News at news.nd.edu on October 20, 2020.