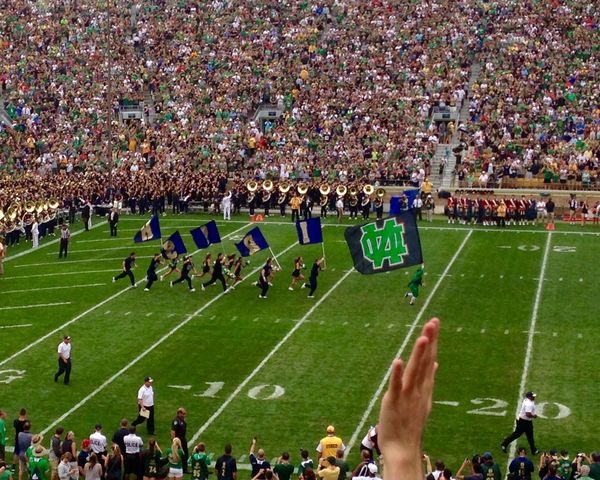 This story comes to us from Robert Power, a University College Dublin grad and current ESTEEM student.

“Offensive Pass Interference”: Words that meant absolutely nothing to me before enrolling at the University of Notre Dame, had ended up defining the season for this great university’s fabled football team. A narrow defeat at the hands of the reigning College Football National Champions – the Florida State Seminoles – had come to pass thanks to a dubious, last-minute call from a referee no doubt influenced by the raucous atmosphere generated by the home fans at Tallahassee’s Doak Campbell Stadium. The decision had brought to an end the Fighting Irish’s perfect 5-0 record and was the catalyst to a run of form that saw us eventually fall out of National Championship contention. However, this defeat and the reaction to it by the Notre Dame faithful told me everything I needed to know about the unique community of which I was now a member. Watching on TV from home, I could hear the cries of “LET’S GO IRISH!” overwhelm even the jubilant – and in this case, relieved – celebrations of the notoriously passionate FSU support.  In the face of defeat, the travelling Irish contingent vociferously proclaimed their pride, defiance, and loyalty; traits that perfectly characterize this inimitable community.

From the moment I had arrived at Notre Dame, many of my early discussions with newly-acquired friends and acquaintances included questions such as: “Have you ever seen a college football game?”, “Have you ever experienced a college football game weekend?”, and most commonly, “Have you ever experienced a Notre Dame game weekend?”  Unfortunately, the answer to all of these questions was “No”. Fortunately, I wouldn’t have long to wait to see what all the fuss was about – and it didn’t disappoint!

First up: Rice University. Some of my more football-informed friends had ensured me that a win would never be in doubt, and that I should concentrate most of my efforts on enjoying the tailgating. Tailgating? A word which I previously understood to represent an illegal driving manoeuvre had suddenly taken up a whole new meaning. What more could a 23-year-old Irish guy ask for than a stadium parking lot full of ardent football fans of all ages sharing each other’s company, food, and drink? And that this was all before a ball was even kicked! Great craic!

Tailgating at Notre Dame really is something special. The variety of people you meet was something I had underestimated. From the hugely successful alums back in town to rekindle old relationships, to the ambitious current and aspiring Domers eager to learn from their predecessors, the unbreakable community spirit was never more apparent to me than it was during those home gamedays. This communal atmosphere is only amplified when the real business starts at kick off. The coordination and cooperation of so many different groups such as the band, the cheerleaders, the fans, the organizers, and, of course, the footballers exemplifies the feeling that such events couldn’t be as special as they are without a team effort that involves all facets of the entire university. The impeccable rendition of the Alma Mater following the 31-0 humbling of our great rivals, Michigan, was my personal highlight of the year and only served to reinforce the fact that I had made the right choice in coming to Notre Dame.

Football weekends at Notre Dame are certainly befitting of the “Great craic!” tag; a measurement by which all Irish people evaluate the “fun-ness” of social gatherings. But they represent so much more than that!