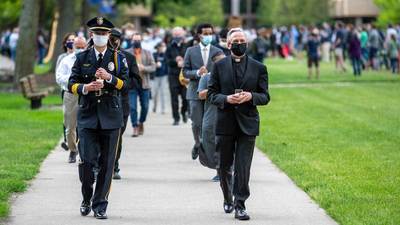 Prayer For Unity Walk For Justice

With the image of “Christ the Teacher” on the south façade of Hesburgh Library as a backdrop, University of Notre Dame President Rev. John I. Jenkins, C.S.C., urged members of the campus community Monday evening (June 1) to recommit to and pray for unity and racial justice in our nation.

Organized by the Office of the President and by Campus Ministry, the “Prayer for Unity, Walk for Justice” event on the Library Quad came amid the turmoil following the death of George Floyd at the hands of Minneapolis police officers, and the subsequent peaceful and violent protests there and in many other cities and towns nationwide.

In remarks to more than 1,000 attendees on campus and many more online, Father Jenkins remembered tragedies of the past, including the deaths of Emmett Till, Medgar Evers and the Rev. Martin Luther King Jr., as well as those of more recent times, from Eric Garner to Breonna Taylor to the congregants of Emanuel African Methodist Episcopal Church in Charleston, South Carolina.

“We gather tonight not just to reflect on police violence against a single man in Minneapolis,” Father Jenkins said, “but on a legacy of violence, often conducted with impunity, against black men in our nation. We confront the heavy burden of a legacy of racism.”

In preparing his remarks, Father Jenkins said he found it difficult to find the right words.

“If it were only a matter of a bad police officer, and bad police tactics in Minneapolis, we might know how to respond,” he said. “These were present in Mr. Floyd’s case, but to focus only on those facts is to miss the point, to miss the reason for the outrage. The challenge is deeper, more enduring, more tragic and more daunting. It is difficult to find words adequate to respond to that challenge.

“I will say this. To black colleagues, students and friends: I am so sorry for the pain you are suffering. Several of you told me you wept when you saw the terrible video from Minneapolis. No doubt there has been a mixture of sadness, rage and despair as these killings go on. We are all responsible for combating the legacy of racism, but its burden falls on you. You no doubt have felt the weight of that burden intensely in the past week. I am sorry.”

Father Jenkins acknowledged the dedication of police officers who put their lives on the line daily, and urged people to not allow the actions of the few to “smear the work and reputation of the thousands of good officers who serve us.”

He took hope from the protests of the past week. “We need an outcry,” he said.

But, he added, “As welcome as protests have been, the violence, the burning, the shooting will not serve the cause of justice. It will only perpetuate the violence.”

Following the event on the Library Quad, Father Jenkins and Shibata led participants on a walk for justice from the Main Quad to the Grotto of Our Lady of Lourdes to leave candles and pray individually for unity and justice.

Participants and attendees in the service were asked to abide by social distancing guidelines and wear masks as part of the University’s commitment to health and safety in the midst of the coronavirus pandemic.

Originally published by Dennis Brown at news.nd.edu: on June 02, 2020.