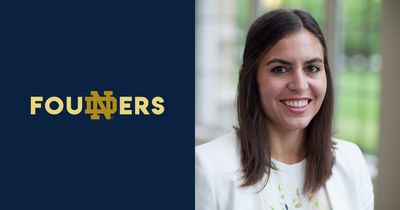 According to the National Cancer Institute, 13,800 women in the United States are diagnosed with invasive cervical cancer each year. In 2020, an estimated 4,290 women died of the disease. About 39 million women are affected by the human papilloma virus (HPV), which leads to a high prevalence of cervical cancer and increasing rates of other gynecologic malignancies. This is happening despite very specific cervical cancer and HPV screening guidelines from the National Cancer Institute. All women should have a Pap smear every three years and HPV screening every five years starting at age 25 and continuing through age 65.

And yet, many women do not get screened.  Eydis Lima, a 2018 graduate of the University of Notre Dame’s ESTEEM Program, believes this is a problem that needs a solution. Lima is so passionate about the need for more universal screening that she founded a company, Curiva, with a technology platform intended to make potentially life-saving screening exams more accessible, easier to implement for patients and their physicians, and with more immediate, actionable results.

Lima says she specifically chose to attend Notre Dame because of the university’s reputation for helping entrepreneurs bring products to market. “ESTEEM was the number one program on my list of the appropriate next steps to become an entrepreneur because it offered the ability to write a combined technology and business-driven thesis. I could come into the program with my own capstone project, and it exposed me to to the appropriate alumni connections in Silicon Valley who could help advance our technology.”

She adds, “Starting a company is extremely difficult. I believed ESTEEM would help me on the first step of this journey.”

Lima’s entrepreneurial journey started more than a decade earlier. After earning an undergraduate degree in Chemical Engineering with a concentration in Biochemistry from the University of Massachusetts-Amherst and studying International Business at the Pontifical Catholic University of Rio de Janeiro in Brazil, she worked in the life sciences industry for AbbVie and LifeCell Corporation for three years. Seeing an opening in the research lab of renowned researcher-entrepreneur Dr. Gil Mor of Yale University, Lima sought out a mutual connection to secure an interview and then was hired for the job.

“This turned out to be a life-changing decision,” admits Lima. “I had wanted to be a physician, but working on extremely forward-thinking translational research projects with one of the most entrepreneurial doctors in the Yale Department of Obstetrics and Gynecology changed my career trajectory. We moved a drug candidate for an ovarian cancer therapeutic, Cantrixil, from in vivo studies to a sale to Kazia Therapeutics. Cantrixil is now in phase II clinical trials in the United States and Australia. It was exciting to be part of this and other projects in the Mor Lab in collaboration with many clinicians, scientists and engineers. It was then I decided to become an entrepreneur.”

Working within an Obstetrics and Gynecology Department exposed Lima to clinical issues. Chief among them were gaps in patient education and patient awareness of the need for screening exams for cervical cancer and other diseases. “Sometimes women simply didn’t know they needed regular screenings or miss important follow-up exams. Sometimes, in addition to a Pap smear women require pelvic ultrasounds and surgical biopsies, such as colposcopies. Other times the issue was a lack of insurance and inability to pay for their care,” she says.

“The largest pain point to solve is streamlining the diagnosis workflow. There is so much to gain from patients receiving test results in real-time while also supporting early detection and avoiding expensive treatments and high mortality rates at a later stage,” Lima adds.

The problem and the opportunity it represented stuck with her. Five years ago during a Yale Healthcare Hackathon in which members of various labs would come together to brainstorm ideas, Lima proposed the idea of a wearable patch that could support patient compliance with screenings and diagnostic tests for cervical cancer. When colleagues liked her idea, Lima continued to fine-tune her thesis.

“Gary is a cancer surgeon and understands the need for earlier stage diagnosis of gynecologic cancers. He’s also very entrepreneurial—he currently works on 10 to 12 projects that are in clinical trials. Having his insight and experience is invaluable,” Lima says.

Medical patches are a fast-growing niche within wearable technology that includes patches designed to simply deliver medications and others like Lima’s that include sophisticated diagnostics, sometimes in combination with digital health. One recently announced wearable patch for diabetes measures blood sugar within a small amount of sweat without drawing blood and administers insulin in stages according to the wearer’s levels. Another example is a patch that tracks cardiovascular signals and multiple biochemical levels in the body at the same time.

Lima’s non-invasive dispatch™ employs a microneedles-mediated diagnostic patch that detects early onset cervical cancer, replacing invasive procedures such as the Pap smear and colposcopies and reducing associated patient anxiety. The digitized medical device is able to detect novel targets within 30 to 45 minutes, the equivalent of a clinical visit, rather than waiting hours or days for test results. At the end of the visit, the results are integrated in real-time to an electronic medical record or an app named ELLE. The rapid results benefit health professionals and patients by streamlining the diagnostics workflow of cervical cancer and minimizing patient stress while waiting for results. The approach also may reduce the long-term costs of treatment.

During her time as an ESTEEM student, Lima soon leaned into the expertise afforded to her by Notre Dame’s IDEA Center, the core of all commercialization and entrepreneurial activities at the University. When she first arrived, the name of her startup was DermaDiagnostics, but Lima soon learned people immediately thought her technology was a dermatology solution rather than gynecologic cancer product.

“The IDEA Center encouraged me to develop a new name and connected me with Notre Dame law school students who helped with the appropriate trademark searches and ultimately with the new entity name filing. Our intern and prior mentee of mine at Yale, Mansoor Akbarzai, and I brainstormed new names and came up with Curiva, combining the word cure with a derivation of the word vida, which means life in the romance languages. The new name is much more reflective of who we are as a company,” Lima says.

Early-stage startups, particularly in the life sciences space, are extremely challenging, a lesson Lima has learned. Immediately after completing the ESTEEM program, she headed to Austin, Texas, to participate in the MassChallenge accelerator, part of the global network of zero-equity startup accelerators. Curiva was one of about 50 startups selected for the 2018 semi-finalists cohort.

While it was an honor to be selected and to participate, Lima was bootstrapping herself, which was incredibly difficult. Fortunately, family contributed to her efforts. During her time with the MassChallenge accelerator, Lima was connected with a number of mentors, coaches, and investors and succeeded in raising $50,000 of non-dilutive funding and a National Science Foundation I-Corps grant for customer discovery activities.

As part of Curiva’s de-risking process, Lima also participated in the National Science Foundation’s I-Corps in San Francisco where she and her team were challenged to meet with patients, family practitioners, gynecologists, oncologists, and insurance companies. The insights gained were helpful; most feedback was positive with those interviewed immediately seeing the potential of the product to increase patient engagement in critical screening tests for cervical cancer, streamline and reduce the cost of diagnostics, and ultimately improve patient outcomes.

Returning to South Bend, Lima has lost no time in continuing to advance her technology and company. She has applied for a Small Business Technology Transfer (STTR) Phase I grant with the National Institutes of Health and hopes it will be approved by late 2021. She has also begun working on the U.S. Food and Drug Administration approval process, following the 501(k) pathway. Of course, fundraising is another highly important process. Despite the hard work ahead, she is true to her mission to reduce the incidence of gynecologic malignancies and cervical cancer by increasing testing compliance through a non-invasive diagnostic patch.

To others who want to follow her lead into the unknown of entrepreneurship, Lima says simply, “Go for it—just make sure you have the right mentors to support you and always think outside of the box.”

Originally published by Melanie Lux at ideacenter.nd.edu on April 08, 2021.