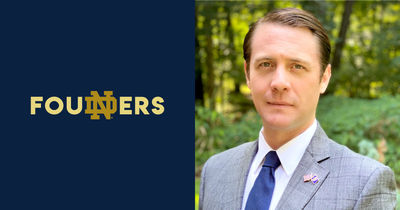 Military veteran turned founder of a growing technology-enabled service business, Dan Kervick, Jr., is very much mission-driven. And he doesn’t shy away from doing all he can to advance his causes.

Kervick (a 2019 graduate of ESTEEM) grew up in a close Irish-Catholic family outside of Philadelphia. Both of his grandfathers, neither of whom went to college, were diehard Notre Dame football fans and shared their love of the Irish in their grandson. For 35 years, Kervick’s parents, Dan Senior and Kathleen, ran a successful physical therapy equipment repair business in the family’s basement. The company didn’t make millions but did provide a stable foundation for the family. Observing his parents, the future company founder learned an important lesson.

“My parents showed me the real American Dream is working for myself, providing for my family and improving the lives of others,” Kervick explains.

After earning an undergraduate degree in economics from Villanova University in 2009, Kervick entered the Navy’s Officer Candidate School in Newport, Rhode Island, fulfilling a lifelong dream to serve in the military. From 2010 through 2016, he focused largely on counter-terrorism operations in the Middle East, but also worked on projects associated with China’s expanding naval presence. He developed skills critical in the Navy that would prove critical to his civilian life as a company founder.

The year before leaving the military, Kervick approached his father about co-founding a new take on the family business. Instead of a sole proprietorship servicing the local market, he saw an opportunity to address a major industry issue by establishing a national, technology-enabled field service company able to align and scale with corporate physical therapy, healthcare and wellness enterprises. The new company would manage clients’ capital equipment across the life cycle while providing enterprise-level data.

“The market pain point for national companies was having to rely on local technicians that each had their own approach to customer service. Vendor management was a nightmare. I believed we had a unique opportunity to leverage Dan Senior’s knowledge of the technology and relationships with technology and data. He agreed and together we founded Flagship Management in 2016,” Kervick says. “My parents showed tremendous faith and confidence in me.”

Kervick had two stipulations for the business.  First, he didn’t want to rely on institutional investors; he preferred to bootstrap the company and use the company’s own revenue and seed capital from friends and family only to fuel growth. This would protect his ability to execute his second stipulation and ultimately a core company mission: to hire as many military veterans as possible. He explains his motivation.

“America is failing its military vets. When they leave the service and return home, it’s harder than it should be to find a job in the civilian workforce because of the difficulty translating military skills to the private sector. Look at a vet’s resume and it is full of military jargon, which is confusing for HR recruiters. Unemployment and underemployment among vets is appalling, which adds to other issues like post-traumatic stress disorder, alcoholism and suicide.”

He adds, “Given veterans’ service to the country, it’s our civic duty to bring them on and train them for solid careers in our industry rather than low-paying, dead-end positions. If we don’t, future generations will see their parents and grandparents who served in the military struggle and will not want to serve themselves, putting us at a disadvantage should our nation face a future military conflict.”

Kervick considers Flagship’s social mission an integral part of its value proposition and stresses the impact of its military vet workforce on customers’ success right alongside that of its field services, asset management and data analytics. “Our people are highly committed and highly performing people with the skills every company wants: tenacity, adaptability and empathy. Customers appreciate that.”

Flagship signed its first national contract in 2016. Believing he could accelerate the company’s growth with additional business knowledge, Kervick enrolled in an MBA program but quickly realized it didn’t meet his expectations. He then combed the internet for an academically rigorous master’s program that emphasized entrepreneurship.

Kervick’s search led to the University of Notre Dame’s ESTEEM Graduate Program, a program that brings together technology, science and entrepreneurship in an intense, 11-month on-campus experience. Kervick enrolled and he and his family—wife Lauren, also a Navy veteran, and daughter Charlie—moved to South Bend, Indiana.

“What attracted me was the convergence of business, science and technology,” he says.

Many ESTEEM participants are fifth-year students so the former Navy officer and active entrepreneur was a bit of an anomaly. Yet Kervick fit right in, collaborating with fellow student Anand Shah on another startup, Tembo, while advancing Flagship and working on a capstone project for Booz Allen Hamilton that focused on the impact of emerging technologies on the intelligence community. He also found an invaluable mentor and role model in David Murphy, the executive director of ESTEEM, who continues to serve as a trusted advisor and friend.

Says Kervick of the meeting, “I took a chance and he liked what we were doing. Just months later, ATI became one of Flagship’s most important customers. I think this speaks to the power of the Notre Dame network.”

This break and recent support from the PenFed Foundation Veteran Entrepreneur Investment Program have been critical to Flagship’s success. Today, the company does business in 40 states serving industry leaders and 70 percent of Flagship’s field-based technicians are military vets. The company has remained fully operational throughout the COVID-19 pandemic as an essential business. Kervick says his field force, drawing on their military experience, never hesitated in helping customers keep their physical therapy businesses open so patients had access to care.

Five years in, Kervick continues to look for ways to grow his business and advance his mission. He is currently enrolled in the Harvard Kennedy School where he earned a prestigious Black Family Fellowship, which is given to select military veterans as part of the Center for Public Leadership. In addition, Flagship was accepted into Harvard's Innovation Lab. Kervick credits his immediate family, which now includes one-year-old Caroline, for allowing him to pursue his mission.

Kervick offers this advice to others who wish to pursue the American Dream. “Enroll in ESTEEM and leverage the Notre Dame network. You’ll learn what an entrepreneur needs to know from all of them.”

Originally published by Melanie Lux at ideacenter.nd.edu on October 14, 2020.