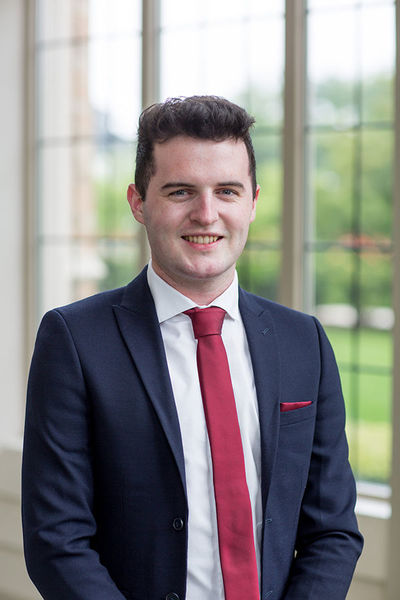 This week in ESTEEM has provided a full spectrum of what both ESTEEM and Notre Dame has to offer for its students. My week had everything from pitching to a room of venture capitalists to formal dinners, all topped off by watching Notre Dame beat Stanford on campus on Saturday evening!

The week kicked off with a 90 second elevator pitch of my Capstone Thesis project in front of the class. These pitches give a great chance to really improve your skills at effectively describing your project in 90 seconds. It’s challenging to describe something complex in such a short space of time without over simplifying it but I learned that you also need to leave the person you are pitching to want to know more about the project so that the 90 second elevator pitch might turn into a more valuable conversation later on. I have been surprised by the amount of times I have been asked “What are you working on?” so it’s really valuable to have something ready that can be used in social settings.

On Thursday, the Irish students in ESTEEM were invited to meet staff from Irish and UK universities to fill them in on our experiences to date in ESTEEM. There were staff from my old university back in Ireland at the event and it was great to have a connection all the way from Ireland in Notre Dame.

For my thesis, I am pursuing a Founder’s Project. Founder’s Projects are based on student inventions which have technical merit backed by a high-potential business plan. In my case, I am pursuing a project based on research I completed as part of my previous Masters in Computerized Engineering which implements A.I. to track food wastage. Alongside the support and guidance of ESTEEM in pursuing this project, I also have access to the IDEA Center – Notre Dame’s innovation incubator. This means that while I am pursuing the project as part of ESTEEM, I also had the opportunity to put it into the IDEA Center's “Engine Process” which aims to validate the customer need for startups and assist students in bringing their startup to reality. As a result of this, I was given the opportunity to pitch to a number of venture capitalists on Friday which was a surreal experience for me. The feedback I got was surprisingly positive and served a real milestone as I had been working hard over the last few months to develop this project. As a result of my pitch on Friday, the IDEA Center have now provided me with funding to take my project to the next level and establish it as a company which is massively exciting. A few months ago I never would have thought that it would have been realistic but I’m now on the way to having my own startup which wouldn’t be possible without ESTEEM and the access to resources it provides.

Finally after the pitch session, I attended a dinner with the Notre Dame California Club where I made some interesting connections with people from Silicon Valley where I hope to bring my startup next year.

Once the business end of the week was wrapped up, the real on-pitch business kicked off. From the start of the week there was a sense of excitement on campus. Both teams were unbeaten going into the game which meant there was an additional level of tension surrounding the fixture. On the game day, campus was electric. I attended the game in the student section which is always great fun. I’m pleased to announce exclusively here that after five games I’m finally starting to understand the rules of American Football.