Lieutenant Michael Hood graduated from the U.S. Naval Academy in 2005, attended fight school, and was deployed around the world with the Navy to conduct helicopter operations until 2012, when he started teaching in the ROTC program at Notre Dame. Hood, who studied math and engineering in his undergraduate years, had become interested in technology and entrepreneurship, so he joined the ESTEEM Program. 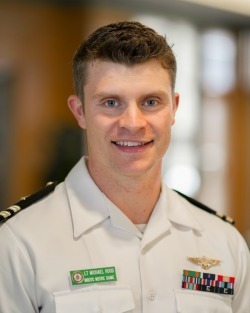 “It was a great blend of all those interests of mine,” says Hood, who worked on a new nanomaterial developed by Associate Professor Masaru Kuno’s laboratory. “I was looking for anything related to nanotechnology. I didn’t have any prior experience. I had this notion that nanotechnology is a revolutionary area of research and potentially new industries are going to come out of it. I wanted to give myself some exposure to that field. I think it’s really interesting to be able to build a new technology and design new things.”

ESTEEM provided exposure to the comprehensive process of moving an idea to commercialization.

“The most valuable thing was to really understand how the whole process works – coming up with an idea, getting people to support you and fund you, building something out, and marketing it,” he says. “It sort of demystified the whole experience of business. I think a lot of technical people are very intimidated by business because they don’t understand the way it works. This is a process like anything else. There’s things you do and don’t do. If I could figure out calculus and physics, I could figure out how to market something.”

Hood, who will be in the Navy for one more year, is considering work with some high-growth software startup on the West Coast. His ESTEEM skills will accelerate the job search.

“Understanding what a startup employer is looking for will be very helpful as far as being able to cultivate the way I present myself,” he says. “I’m selling myself instead of selling some product. It’s the same process you learn in customer development. That’s one of the big things I think I learned from the ESTEEM Program. The network has been a big plus, too. I didn’t realized the importance of meeting people and talking to people and being able to interact with people. It’s really important to get out there and talk to people and network. That’s something I never thought about much until ESTEEM, where I got to see all these people. You kind of get to see how all this stuff works behind the scenes.”