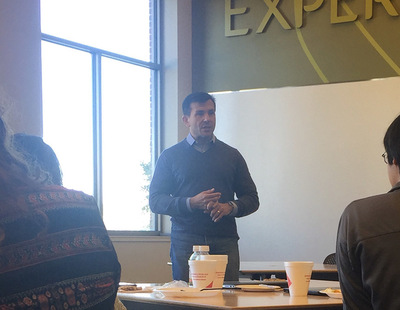 John Crowley’s appearance was the most anticipated Lunch & Learn so far. A few weeks prior to him joining us in the Greenhouse at Innovation Park, we watched the Hollywood version of his story in the film "Extraordinary Measures." During his discussion with us, we realized just how extraordinary he has been and continues to be in the biotechnology world.

The answer to this first question is a happy one. His son, Patrick, is currently a senior in high school. His daughter, Megan, is currently a sophomore here at the University of Notre Dame.Crowley started his informal conversation with us by telling us when his story began.  It was the March of 1998 that his children were diagnosed with a severe neuromuscular disorder called Pompe disease. He has been working to find a treatment and cure to genetic diseases ever since, founding a variety of biotech companies. Using this framework he addressed two commonly asked questions: “how are his children today?” and “how did his story get made into a movie?”

The film version of his story began when a Wall Street Journal writer named Geeta Anand wrote a piece about Crowley that was featured on the front page. Harrison Ford read the piece and reached out in regards to creating a film out his story. Crowley followed up by discussing the largest artistic license that was taken was in the negotiation of the acquisition of Novazyme Pharmaceuticals by Genzyme Corporation. He comically explained that it took a lot longer than portrayed and was an extremely involved process.

He then opened up our meeting to questions. This evolved into an interesting discussion about a variety of subjects including disease care systems and the issue of pricing pharmaceuticals. With every question, Crowley provided wonderful insight. This year, Crowley is the industry sponsor for a few ESTEEM students with their capstone thesis. It was a joy having him with us for lunch.