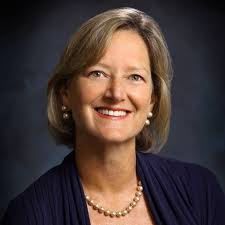 Recently the ESTEEM Program was privileged to hear the stories, lessons, and serendipities of an extraordinary entrepreneur: Mrs. Celeste Ford, Founder and CEO of the global systems engineering and project management firm Stellar Solutions, Inc. With insightful anecdotes about her professional journey and honest appraisals of her own industry, Celeste provided a unique perspective into the process of starting a company, her values as a CEO, and her goals for the business she’s built from scratch.

How did Celeste get to where she is now? It would seem safe to assume that someone with a bachelor’s degree from the University of Notre Dame and a Masters degree from Stanford, both in Aerospace Engineering, must have had a lifelong dream to become a Space Systems engineer. On the contrary it was alphabetization more than aspiration that sent Celeste on her course to become an accomplished satellite systems engineer. “I had no idea what I wanted to do, so I opened the directory of college majors and saw Aerospace Engineering listed first” she said, recalling that despite being uncertain of exactly what it was that Aerospace Engineers did, she was assured by high school counselors that her early aptitude for math and physics made her a great fit. And enjoy it she did, excelling in her studies as both an undergraduate and graduate student before securing a job first at the Communications Satellite Corporation and later as a project manager on the Space Shuttle Program for NASA and earning the Aerospace Corporation’s “Woman of the Year” accolade in the process.

Celeste loved the work she was doing, but as her autonomy as an employee began to reach its limit she found herself feeling constrained, and soon knew she wanted to start her own company. A daunting task for most, for Celeste it boiled down to two simple variables. “If you want to start a business you need to be able to provide something that somebody else wants, and you need to convince them to pay for it,” she imparted matter-of-factly. “I knew I had both of those things, so it never occurred to me that I wouldn’t succeed.”

True to her own advice, Celeste had both of those things in 1995 when she founded her own company, but Stellar Solutions early days were much humbler than its current status as a multinational industry leader in space engineering systems would suggest. Celeste left her job with a single partner and a single contract guaranteeing her work for only the next three months. But quality work and a working knowledge of the industry earned her a reputation, and her commitment to her vision laid the foundation for an enduring organization. “I wanted to build something that would last,” said Celeste in response to an inquiry about any plans to take the company public. In contrast to the characteristic entrepreneurial dream of bringing a company all the way from the back of a napkin to a successful publicly traded corporation, she says she takes the most pride in having built a company that still belongs to her, and that, just as importantly, employees want to work for.

In closing remarks, Celeste reflected on her role as an exceptional female role model in a field still disproportionately populated by men, both as an engineer and a CEO. “At the end of the day, your customers are buying your company’s product,” she concluded. “There is no substitute for a quality product.” With Stellar Solutions continuing to impress in its industry, Clearly her success as an entrepreneur, an innovator, and a leader has proven that sentiment true.