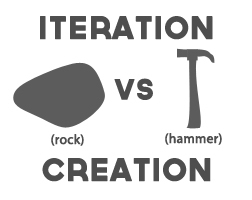 Someone invented the hammer millennia ago, but it looked much different than the tool we have today. Over time people found new ways to make the tool better, and today we may have a worse hammer than we will have millennia from now. It's small incremental changes in the repetition of making the hammer over and over that have lead to new small improvements - this is iteration. Each new small improvement is an iteration. We probably haven't seen the last iteration of the hammer yet.

Some companies live off of iteration. There are hundreds of companies that work really hard making small changes to hammers claiming to have made the best one and patenting their creation. Then another one will build off the patented hammer but make it different enough to claim a new patent - it's a world of small incremental changes and patent wars. You see it publicized more with cell phones today as we debate  whether or not the corners are rounded the same on the edge of two cell phones and decide if that is worth millions of dollars. It's iteration and it's not all bad. For example, you could say that the iPhone is simply an iteration of the original cellphone. Over time the phone has evolved into the cell phone over thousands of small incremental changes to where it is today.

Creation however is making a whole new idea. Creating is much different than iterating something. It takes something that no one has ever created and making it real. It's not making a better hammer but making the first hammer - you are the person who picked up the first rock to hit against another rock. That doesn't mean you made a good hammer, but you made it first. The first phone was junk compared to the iPhone but without it there would be no iterations to build upon.

Creation encourages iteration but one may not be more important than the other. Sure we would be still using a rock for a hammer today, and many still do, but, without the nail guns and wrecking balls that came after the hammer, we would not have been at the same point we are today as an economy or as a community. Both iteration and creation are what move us forward.

So what do you think, would you rather be an iterator or a creator?