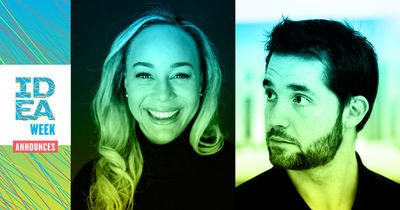 After being canceled last March due to the coronavirus pandemic, Idea Week, an annual gathering that celebrates entrepreneurs, innovation and the incubation of new ideas, will return April 28 to 30 (Wednesday to Friday).

Alexis Ohanian, co-founder of the social news website Reddit and the venture capital firm Seven Seven Six, and Morgan DeBaun, CEO and founder of Blavity, a media company that focuses on Black culture, are the first major keynote speakers to be announced for the event. DeBaun will speak on April 28 and Ohanian on April 29.

Idea Week is hosted by the University of Notre Dame, the South Bend-Elkhart region and various community organizations and businesses.

It will be held primarily online, although a few hybrid online/in-person events that follow CDC, Indiana State Department of Health and Notre Dame event guidelines will take place.

Registration to attend Idea Week is now open. Admission is free for K-12 and college students and $39 for other members of the public.

Ohanian was born in Brooklyn, New York, and grew up in the suburbs of Baltimore. He wrote the national bestselling book “Without Their Permission,” and has long advocated for the open internet, STEM education and paid family leave. Alongside Garry Tan, he also co-founded Initialized Capital — a seed-stage venture fund with more than $770 million under management and a portfolio with $40 billion in market value. Ohanian sold Reddit to Conde Nast in 2006 but returned in 2014 as executive chairman to help lead the turnaround of the now independent company. Reddit was last valued at $6 billion. In 2020 Ohanian founded Seven Seven Six, a new venture fund focused on people, culture and community.

DeBaun is the CEO and founder of Blavity, a leading media company for Black culture and millennials. Since launching Blavity in 2014, DeBaun has led the company to successfully acquire Travel Noire, a travel platform for Black millennials, and Shadow And Act, a Black entertainment news site. Under her leadership, Blavity has launched several leading consumer summits including Summit 21 for Black women creators and Bay Area’s AfroTech, the largest tech conference for Black innovators and founders. While scaling the company, DeBaun has raised more than $12 million from top Silicon Valley venture firms such as GV (formerly Google Ventures) and Comcast. DeBaun is also the founder of WorkSmart, an advising program that teaches small business owners how to scale their business, and the “WorkSmart” podcast, which is designed to help established entrepreneurs get the guidance needed to grow by taking them inside real-life advising sessions and interviews with CEOs. DeBaun is a St. Louis native and a graduate of Washington University in St. Louis.

Originally published by Nicholas Swisher at ideacenter.nd.edu on March 25.