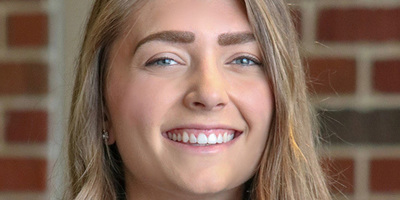 Kaitlin Gawkins received her B.S. in Biology from the University of Dayton in 2019. She graduated in May 2020 from ESTEEM.  This past July she began her role as a Social Impact Analyst at the American Family Insurance Institute for Corporate and Social Impact. I recently sat down to talk with her about her student internship at the IDEA Center.

What was your specific role as an intern at the IDEA Center?

I was a Technical Market Analyst on the 2-Stroke team in the Commercialization Engine. When a new technology was disclosed to the IDEA Center, we would do the initial analysis to get a basic understanding of the market opportunity and risks in terms of technical value proposition, market size, competitive landscape, and barriers to entry.

What was your main takeaway from your time working with the IDEA Center?

The biggest lesson I learned during my time with the IDEA Center was the importance of having confidence in my work. Oftentimes, I had to make some big assumptions in order to move forward through an analysis, which was difficult for a person coming from a STEM background. But, as long as those assumptions were based in logic and backed up by facts, they turned out to be the area where I could inject my own stamp of creativity on the work.

What influence did your IDEA Center work have on your full-time career discernment?

Through my work with the IDEA Center, I learned that I love working on problems with no clear endpoint or path. Rather than plug-and-chug work, which has one correct solution, what I worked on as a Technical Market Analyst often had a range of possible outcomes which were guided by the depth, quality, and creativity of the analysis. This realization led me to seek out roles in new, emerging industries that allowed for a high level of autonomy with ample opportunity for collaboration.

Do you use any of the skills you leveraged in your IDEA Center work in your full-time job? If yes, to what extent?

YES. I’m currently in a role where I get to serve as an intermediary between venture capitalists, startup founders, and corporate strategists. The skills I learned as an analyst absolutely help me to approach those conversations with equal parts self-assurance and humility. As an analyst, I spoke with a lot of people who had more experience in their fields than I did and as a result, I learned how to ask solid, relevant questions and synthesize complex information that was unfamiliar to me. Now, that’s pretty much what I do every day!

What advice would you give students at ND looking to get involved with the IDEA Center?

Do it! But before jumping in, talk to as many analysts as possible to gauge where you want to work. Every job at the IDEA Center is so different -- from the time commitment required to the nature of the work to the skills you’ll learn. You get out of it what you put into it.

Holiday parties at Kunci’s house! I loved being able to sit down outside of work to chat, play cheesy games, and eat delicious food.

Favorite spot in the IDEA Center?

My favorite spot was on the 3rd floor at the big tables in the back. There was plenty of room to spread out, a big window to look out of, and friendly faces to chat with throughout the day. Plus, it was near Kunci’s office so I could easily pop in for a chat!

Originally published by Emily Tyson at ideacenter.nd.edu on October 08, 2020.