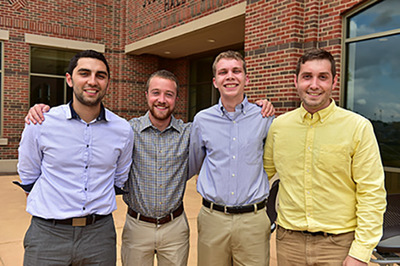 John Means, a member of the ESTEEM Class of 2016, returned to his undergraduate campus, Xavier University, and helped recruit four men to the Class of 2017. Ben Kelty, Roy Saikali, Alex Curry, and Mitchell Cornely say the program provides complementary skills – and the connection to the Notre Dame alumni network and career services help – that allows them to pursue their dream careers. The intense summer semester, with rigorous courses in mostly-new topics, helped the cohort bond and feel at home on the Notre Dame campus.

Kelty was a biophysics major and a math minor aimed at medical school until he realized he enjoyed the problem-solving dimension of research rather than the research itself. “I wanted to go into industry outside of research but problem-solving,” he said. “That’s what led me to ESTEEM, so I could get those skills to get access to industry.”

His ESTEEM capstone involves continuing work with Gleaux, creators of bioluminescent plants, this time focusing on the marketing aspects. Kelty once brought a luminescent plant to campus and took pictures of it at landmarks such as Touchdown Jesus, the Dome, the Basilica, the Grotto, and the Compton Family Ice Arena. He’s considering a return to the health care field, not as a physician but as an administrator.

Cornely, a chemical science major with a biology minor, still plans to pursue his pre-med plans after ESTEEM, but wanted to learn the innovation and business side of health care. His capstone involves a device used in the pharmaceutical industry.

“Because I could take a project in health care and it could support my medical school application, I thought it would be pretty useful in terms of getting me where I want to be,” he said, adding that the commercialization training will help as the medical field evolves. “A lot of medicine is transitioning to that.”

Saikali, a chemical science major, also considered medical school but wanted to find a field that combines chemistry and business. His father told him he had to choose – “you can’t have both” – but ESTEEM offered an alternative. “When I heard about ESTEEM, my world was turned upside down,” he said. “I sat down and decided I was more impressed by the ESTEEM pitch and what you see form the successes on their page of their previous students.”

For his capstone, Saikali works with LightSprite in Innovation Park on light transmission spectroscopy, a topic with some connections to his undergraduate work, that engages him with the CEO as well as expert physicists. Meanwhile, he is meeting the demands of unfamiliar courses, sometimes practicing an hour for a one-minute pitch. “They teach perfection here,” Saikali says. “I think that’s one thing I take from Notre Dame – they really want you to be the best. It’s not just going through the motions.”

Curry, who majored in chemistry and minored in business, was looking for a similar combination when an advisor suggested ESTEEM. “She gave me the pamphlet and I said, ‘this is exactly what I was thinking,’” he recalls. “It’s not as technically challenging, but it’s challenging in different ways. It just requires a different mindset. You’re going from a subject that has a definite answer and a definite process. You transition your mindset into this whole full-on designer mindset.”

His capstone, for a small startup in the idea phase, requires that new mindset. He is doing economic and marketing research for a new app in a home sharing niche for people with upscale houses who want strong security. “It’s a lot of learning on your feet,” Curry says. “That’s part of the fun.”

The students say they are grateful for the connections to Notre Dame and the camaraderie of their cohort.

“They make you feel really at home,” Curry said. “You definitely feel connected not only to everybody on campus but everybody off campus. I’ll have a prof tell me to contact someone who graduated 30 years ago. A lot of doors get opened up that I’m not sure previously would have. It brings about a skill set that will give you a competitive advantage for anything you want to go into.”

“The alumni network already has paid dividends for me,” Kelty said. “It’s something that if you take advantage of it, it can help you tremendously. You can find a Notre Dame alum in any industry. It’s such a broad network.”