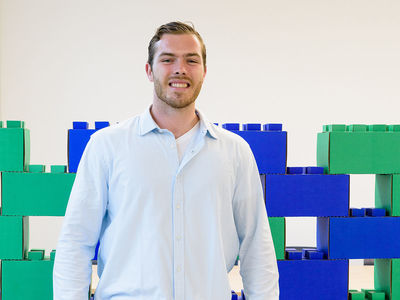 Connor Smith was aiming for a Ph.D. program in chemistry when he chose a chemistry and math double major at Wabash College, a leading men’s liberal arts college in Indiana. Summer internships at a biotech startup and a chemical manufacturing plant, followed by a summer of academic research, convinced him he wanted more. Turned out, he wanted ESTEEM.

“I felt like something was missing,” Connor says. “I realized what I actually really loved the first two summers was being at the intersection of business and industry and science. I enjoyed working with small teams like biotech startups. I realized I liked the small team environment working to solve problems that mattered to the lab.”

For his capstone, Connor is working with Consensus Networks, a two-person blockchain infrastructure startup in Innovation Park. “It has been an absolute blast – market and tech analysis, a deep-dive into emerging technology, learning on the way,” he says.

Connors also works as a market analyst at the IDEA Center and is collaborating with some classmates on a digital sales project. “There are so many opportunities available,” he says. “The hardest part is trying to decide which ones to be a part of. You learn how thin you can stretch yourself. Everyone in the program is such a genuinely great person and so driven and so fun to be around and drawn to. Everyone has such great ideas. It’s a close-knit group of classmates. I think that’s been the most rewarding part. Everyone pushes you to be the best version of yourself.”

That extends to the Notre Dame alumni network, which Connor encounters both in his thesis work and his analyst job. “It seems like all the alums I’ve talked to are so genuine and nice people,” he says. “They’re giving you their time because they want to see you succeed. It’s a really cool atmosphere.”

Connor knows he want to work in startups after ESTEEM – he hasn’t identified a specific industry. “It’s been really fun working with Consensus Networks,” he says. “I’m in the office every day. It feels like I’m working at a startup for my thesis. There’s something new to do every day. I love the excitement and the ambiguity that early-stage startups offer.”