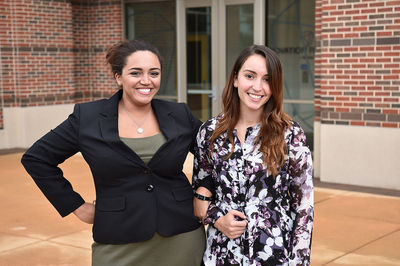 Valeria Gonzalez and Elizabeth “EB” Conklin were suitemates during their first year at St. Edward’s University, Notre Dame’s sister school founded by Father Edward Sorin in Austin, Tex., but they ran in different circles – Gonzalez a math major, Conklin in biology pre-health – through their undergraduate years. Now they’re together in ESTEEM’s Class of 2018.

“It was a happy coincidence,” Conklin says. “We ended up both being accepted.”

The women agree that the program combines the personal attention of St. Edward’s in the context of a far larger institution with greater resources.

“Since it is a small school, I had a lot of opportunities to design my own experience, be more hands-on in research rather than told what to do,” says Conklin, who chose ESTEEM when she heard an alum describe it in her microbiology class, then had several other professors recommend the program. “You have the opportunity to really go after passion projects, try and fail, try and succeed, have the mentorship of professors.”

“The professors really push you to be able to solve these problems on your own because they know you’re capable of doing it,” says Gonzalez, who learned a structured thought process for breaking down problems. “Math students are really lucky that we get to learn these skills. It’s something I bring with me to ESTEEM. I’m presented with a problem and I notice myself breaking it down the same way I would break down a calculus problem. They forced us to take a lot of classes on social issues and rhetoric and writing courses that I might not have gone in if it was not a liberal arts university.

“I felt the purpose of ESTEEM really aligned with what I wanted to do, which was to make an impact. I wanted to go beyond academics to something that would give me skills I could use in real life. It’s been what I thought it would be but so much more. It’s so hands-on.”

Gonzalez is working on an industry capstone thesis project with Inovateus Solar in South Bend, seeking to create an energy fund for investors to help the company develop its energy storage capacity and attract larger projects. She wants to return to Texas and work for a company like Inovateus for a few years before launching her own business.

“I go there three days out of the week and get to work with the people, day in and day out,” she says, adding that ESTEEM skills in entrepreneurship, networking, and customer validation will help the company grow. “I had no idea businesses went through these things. I could solve problems in math classes, but how do I make that appeal to an employer.”

“It makes it much more tangible for patients,” says Conklin, who leverages her prehealth major and chemistry minor to communicate the benefits to prospective customers. “It takes away the aspect of the unknown. Hopefully after validation and market research and pricing strategy, if I could come up with a good business strategy, I would love to be able help him launch his product.”