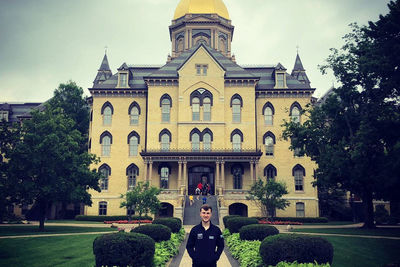 11579. That’s the number that will oddly remind me of a lot of my best memories I’ve had the past year in South Bend, Indiana, studying at the University of Notre Dame. That’s because I was onboard Aer Lingus flight EI122 cruising comfortably at 11,579m through the darkness over the Atlantic Ocean, reflecting on a phenomenal couple of months which, unfortunately, were cut short by the COVID-19 pandemic. Of course, none of this had been planned; in fact, I had only booked the flight a week beforehand. For someone who is as obsessively organized as myself, the very thought of booking such a flight one week in advance is enough to temporarily raise my blood pressure.

I’ve always been a bad sleeper, so getting some shut-eye on an overnight flight has always been an impossible goal for me. As a result, on that flight, while the other 30 or so passengers slept, I took out my notebook, and after reading the farewell note given to me by one of my classmates, promptly started scribbling down some thoughts on a page. The thoughts on my mind skewed more existential than normal; what did I really want to do with my career? Was I really following that path or being distracted by things less important? These thoughts were fitting, given that career aspirations seem to take a back seat once a virus starts to upend the world around you. The funny thing I’ve realized recently is that I usually have a lot of stuff figured out in my mind, but unless I articulate it in conversation or on a page, it doesn’t seem to take shape and thus make an impact on my life. As I continued scribbling on my notebook, the reasons behind decisions I had made in the past year became a lot clearer. Things like applying to the University of Notre Dame, taking the job offer I took, working on specific projects, and becoming interested in certain concepts and topics became a lot clearer to me. By no stretch of the imagination did I come close to figuring out most of the stuff I was thinking about, but I did realize that the ambiguous parts were not something to stress about; only my future self had the knowledge to figure that out.

I always find it funny when people tell me that they have a 5, 10, 15-year plan, because I’m not sure many of those plans could factor in a global pandemic promptly cutting short your Masters degree, forcing you to abandon any hopes you had of seeing out the remainder of your course with your friends before moving to whatever city you plan to start your career in. Nor does it factor in that the resulting recession and fallout will likely affect your career trajectory and for some, may even result in a rescinded job offer, significantly altered start date, or working remotely on your first job.

My time on that flight offered 8 hours of reflection on the year I’ve had at the University of Notre Dame. Nothing really prepared me for life at Notre Dame. I had seen the pictures, of course, but it’s hard to articulate the feeling of being on campus at such an incredible place. I arrived in mid-June of 2019 into O’Hare Airport in Chicago, not quite knowing what to expect and feeling very isolated from everything I knew. Before leaving the airport, I managed to get into a half hour conversation with one of the friendliest airport attendants I’ve ever met, during which he told me of his love for all things Irish, and the multiple times he has seen U2 in concert. A love for all things Irish, I would come to find in the following 9 months, would be an surprisingly common topic.

Following this conversation, I hopped on the 4-hour bus to South Bend. Even after 27 hours of travel, I was still unable to sleep. I remember looking out the window the whole time I was on the bus, although it wasn’t much use because it was so dark. I was mainly curious to see what America was like, given this was my first time in the country. When we finally reached the campus, I stepped off, and before I could admire the place, I had to figure out how I was going to make it to my new house when I had no phone coverage and no idea how to get there. Luckily, the only other passenger on the bus was willing to hotspot me so I could try out an app called “Uber” that I had never used before. Upon hearing my accent, my Uber driver told me to “just keep talking because I love your accent” — at that point, I began to think that I’d get on just fine in America. The next few days were spent wandering around South Bend trying to get my bearings, meeting my fellow Irish classmates who had already arrived, and exploring the campus. It was a very odd time, filled with a lot of nervous excitement for the next 11 months. I wouldn’t even say I had much of a clue what I was doing, but I knew what my priorities were: get a phone plan, buy furniture for the house, and start college the following Monday.