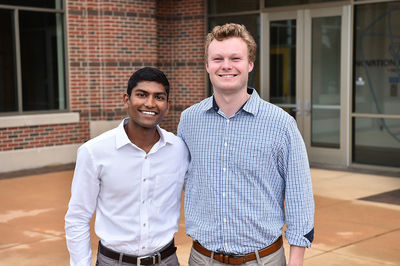 While the Notre Dame environment shares the community spirit and close relationships of their alma mater, Gonzaga University graduates Om Neelay and Barrett Nelson, say ESTEEM’s focus on out-of-class experiences, especially the wealth of guest speakers and accessible alumni, adds an unexpected dimension to the entrepreneurial education. Neelay, who graduated in 2016, and Nelson, who graduated in 2017, did not know each other until they were accepted into the program, but they have become friends.

“It reminds me of Gonzaga in a lot of ways because it’s a community-based environment,” Nelson says. I wasn’t expecting the real-world exposure to entrepreneurship. That’s really cool – CEOs, people who worked with famous people, venture capitalists. In undergraduate engineering school, it’s classes, classes, classes. In ESTEEM, the classes are almost a supplement to what’s important, which is getting out of your shell, hearing from guest speakers, going to network events, and exploring what you might be interested in after the program.”

“The vast majority of our learning is on our own, whether that’s taking the initiative to attend speakers or apply to jobs in different disciplines,” Neelay agrees. That’s something I’ve come to appreciate about ESTEEM. They’re not going to get you a job. They’re not going to start a company for you. They will give you the opportunity to do those things.”

Nelson, an engineering management major with an electrical focus, was in Gonzaga’s Hogan Entrepreneurial Leadership Program, with classes like Business Model Canvas. He considered the university’s fifth-year MBA program but chose the more entrepreneurial path at Notre Dame, his grandfather’s alma mater. In addition to his capstone with a chemical engineering professor, in the early stages of designing a fast-charging solid state lithium ion battery, he works part-time as a market analyst at the IDEA Center in Innovation Park. “That’s been a really nice supplement to the classes I’m taking,” Nelson says. “It’s helped me cultivate some of the skills in a real-life job as I’m learning them.”

Neelay, a biochemistry major with an entrepreneurship minor, says professors expected him to go on to earn a Ph.D. or M.D. He attended his first career fair recently. “That’s one of the things I really appreciate about Notre Dame,” he says. “It’s also what makes the school successful – the integration of all the disciplines, the revenue from commercializing ideas that would have sat in a science building or an engineering building.”

Neelay, who credits his analytical, quantitative, and technology communication skills to his science background, chose a new field for his capstone – helping a large bank find ways to implement blockchain technology into its global trade finance division. “I chose something I knew nothing about,” he says. “They give you the opportunity to learn and grow and develop and expand your network if you take the initiative.”

“I was kind of intimidated a little bit because of the caliber of people I expected in the program,” Nelson says. “I expected it to be competitive. It’s been this really great community of people. Everyone gets along with each other and helps each other out. That’s kind of lowered the pressure of the program as a whole.”

“It’s kind of incredible to be around people who are very proactive,” Neelay adds. “They are all very motivated, and they have something they care deeply about. I don’t think you could go to any program at any school and get that thing. They bring not just talent but individuals from a very diverse set of backgrounds.”