Michael David Whitt knows about translating engineering ideas and discoveries into commercial products, from mercury-free, longer-lasting alkaline batteries to medical devices – he holds four patents and developed a noninvasive early detection method for heart disease that led to the startup Cordex Systems, where he is vice president. 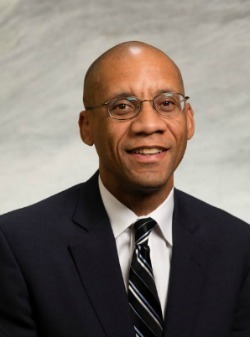 As an associate professional specialist in the Mendoza College of Business who has worked with ESTEEM students since he came to Notre Dame in 2012, he enjoys watching STEM students thrive in a program designed to support success that came to Whitt almost by chance.

“It’s kind of neat to be able to work with the younger kids doing things I wish had done when I was younger,” he says. “I think the mindset was very different when I was in school. I thought about developing things and having a patent in a big company. I kind of stumbled into it. I didn’t plan any of this.

“As an engineer, I didn’t realize until later in my career that it’s always about transformation.  What we’re always doing is trying to transform. It’s about being able to hear what customers say in words and being able to transform it into a metric that can make it valuable and make it competitive. I was in industry for years, and I couldn’t really articulate it.”

Whitt, who has an undergraduate degree in chemical engineering from Purdue University, took an education leave from his job in antibiotics at Lilly to earn a master’s and Ph.D. in biomedical engineering, focused on biomechanics and biomaterials, from Rutgers University/University of Medicine and Dentistry of New Jersey. When he returned to Lilly, he transitioned to a medical device subsidiary in California that became a spinoff company.

Whitt earned an MBA at UCLA, where he and a classmate started developing the device that led to Cordex, and he continued the work when Miami-Dade College, a junior college in Florida, recruited him to start its first bachelor’s degree program in engineering. Cordex won a federal grant, and the device is now being manufactured.

Whitt teaches management and statistics in the Mendoza College of Business, where he helps business students understand the importance of understanding how to commercialize scientific concepts, in addition to teaching modules and mentoring students for ESTEEM.

“It’s really neat to be involved with the students,” he says. “They come from a science background, and they are very good at seeing the problems and understanding the science behind it. What I think I bring to the table is helping them understand that it’s all about transformation.”