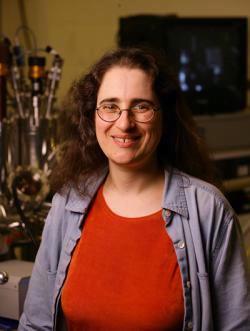 For Marya Lieberman, an associate professor of chemistry and biochemistry, the ESTEEM program offers fresh perspectives from a business focus and enriches the entrepreneurial ecosystem on campus. Lieberman has advised a half-dozen ESTEEM students about analysis of fortified salt for fighting lymphatic filariasis in Haiti and involved some in her Paper Analytic Device (PAD) Project, using paper cards for field-testing the chemical quality of suspect drugs in developing countries.

“Part of what they do in the program is come up with new ways or new applications for your technology,” Lieberman says, recalling her first ESTEEM student, Kelly Krause. “She just really got us thinking about some alternate targets for the test cards. U.S. Customs is always trying to ensure that people aren’t sending narcotics and things in to the country, but there’s also a lot of medicines and herbal remedies and things that people send in. There’s this huge testing burden.”

Lieberman, who filed a patent application for a salt PAD last year and is preparing an application for a high-sensitivity iodine deficiency test, collaborates with a laboratory in Burkina Faso Africa that compares the salt PAD with other low-tech devises for such analysis. Her current ESTEEM student, Daniel Wu, who works with graduate student Nick Myers, is working to ensure the stability of the iodine test PAD.

“That’s going to be part of his thesis, along with the business plan,” she says. “I try to get all the ESTEEM students to do some work in the lab so they have a good hands-on understanding of the technology.”

During the December break, Lieberman ran into a former student, Marco Magallon, who had worked with her as an undergraduate on the salt analysis He had joined ESTEEM and told her about his project, using online maps to identify providers of chore services. For Lieberman, the encounter opened new possibilities.

“I realized I could take this and use it to map where we’re finding these low-quality drugs,” she says. “That’s going to add a lot of value. The people who are using the cards are going to be able to see in real time where the drugs are coming from.”

Such unexpected encounters reflect the environment where students and professors alike keep alert to entrepreneurial possibilities.

“It just keeps me from getting stuck in academic mode,” Lieberman says. “The thing I’ve tried to do with this project is keep it real. We’re trying to make things that are going to be helpful to real people.”