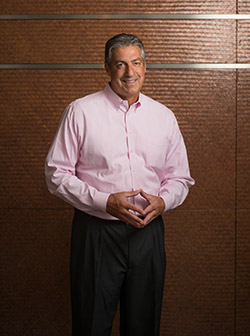 Chris Stevens, who came to Notre Dame on a basketball scholarship and graduated with an economics degree in 1974, entered the world of entrepreneurship while he was playing professional basketball in Europe – he helped open a bar in Belgium. When he returned to the United States, he honed his intrapreneurship skills in seven years at Proctor & Gamble, including five moves in five years. He settled in Boston and practiced his creativity as president of an Anheuser-Busch distributorship that he transformed into a thriving operation.

In 1996, Stevens joined the founders of Keurig Green Mountain, where he developed branding, sales, distribution, and marketing for the fledgling company that launched its product in 1998. He saw both the promise of an innovative idea that transformed the coffee world and the pitfalls of an approach that lacked the foundational business skills for success.

These days, as an adjunct professor in the Mendoza College of Business and part of the ESTEEM faculty, he’s helping future entrepreneurs fulfill the promise without the pitfalls.

Stevens, who has guest-lectured for ESTEEM Director David Murphy, now teaches a course called Sales and Sales Entrepreneurship.“A lot of times, people have great ideas but they don’t have the skills to bring them to life,” Stevens says. “That’s what I love about the ESTEEM Program. It takes extremely bright students with a science, technology, or engineering background, and it gives them the business skills to bring their ideas to light.”

“Nothing happens until somebody sells something,” he says, adding that selling requires creativity and effective communication not only with consumers but with investors and others. “The No. 1 reason why new companies fail is they didn’t sell enough. It’s a constant process of selling.”

ESTEEM students embrace the approach and enjoy success, says Stevens, who also is the founder of CS 74 Ventures LLC, a holding company with 16 initiatives committed to social benefit.

“I really enjoy the students,” he says. “I’ve made some great connections. It’s eye-opening when you take very bright people who just need some help in learning how to communicate and sell their ideas. To see that transformation in a short period of time, it’s very rewarding.”