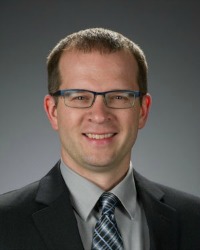 ESTEEM Graduate Program Thesis Adviser Matthew Leevy, a Research Associate Professor and Director of the Biological Imaging Core, has launched a fabrication laboratory in the basement of Galvin Life Sciences Center to serve the University at large. Tony Van Avermaete, a design and fabrication specialist, will serve as the operational manager of the new facility. The laboratory, which includes three CAD workstations, has the most advanced 3D printer on campus and is adding a laser cutter this month. It offers fabrication of a finished design, consultation on designs in process, and comprehensive design and fabrication based on a back-of-the-napkin sketches. The service is set up within CORES for access to all faculty, staff, and students on campus.

“3D printing in particular has been a major trend as a fabrication platform,” says Leevy, who uses the equipment in his own lab to make anatomical models. “3D printing has become a critical tool that many different academics, hobbyists, researchers, engineers, designers… all these folks are plugging into to rapidly iterate and design new parts that advance their own research or entrepreneurial projects.

“What’s cool about it is it’s relatively inexpensive to gain access to it, and just about anybody can design parts and have the made. Some of the parts are incredibly complex, far more so than you could make using traditional manufacturing modalities.”

Leevy, who remembers the time-consuming and expensive process of having a design model made by a manufacturer, started using 3D printing about three years ago and quickly took an entrepreneurial direction that has launched four startup so far.

“We were empowered to start designing some of our own devices and actually make them,” he recalls. “You can create different drafts of it really quickly. You can iterate it and get it into a finished state with incredible speed. As we were creating some of these devices to solve problems for our lab, we realized they had some commercial potential, and that got us into entrepreneurship.”

Leevy, who billed 840 hours on the 3D printer in the first 11 months it was available to others, expects to expand the equipment in the laboratory, starting with a laser cutter.

“Laser cutting is another modality that is being used to create inexpensive parts,” he says. “You’d be shocked at the complexity you can achieve. The good thing about laser cutting is it’s incredibly inexpensive. We expect folks to use the laser cutter to make a range of parts, from perhaps basic lab ware – test tube racks, pipette racks – on up. We intend to use it to make anatomical models and other parts. We’ll be looking to add new part creation modalities as we advance the fabrication laboratory forward.”