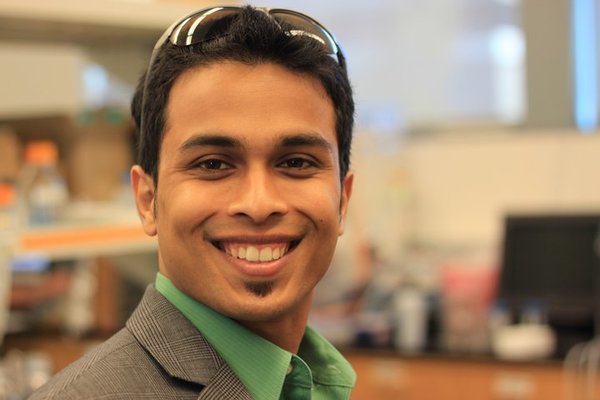 The new assistant director of Notre Dame’s ESTEEM program has a zeal for customers. Not just selling them a product or marketing to them, but really listening to them.

Shah has been a senior scientist at Notre Dame since 2011, working to bridge the biology and engineering departments and create an understanding of how the research -- and breakthroughs -- from the lab can be transferred to the marketplace.

Shah, a biomedical scientist by training with a Ph. D from the University of California Davis in Tissue Engineering, participated in the 2013 National Science Foundation (NSF) Innovation Corps (I-Corps) development program. With a $50,000 NSF grant, Shah teamed up with principal investigator Hsueh-Chia Chang, Bayer Professor of Chemical and Biomolecular Engineering and business mentor Kerry Wilson, founder and president of Springboard Engineering Solutions to build and test a business model in just over 6 weeks. Shah himself acted as the entrepreneurial lead.

During those short 6 weeks, Shah was to conduct 100 interviews with potential customers, which would validate or invalidate their value hypothesis; i.e. Does anyone need what they were developing?

“It’s incredibly intense,” Shah said of the experience. He said the 3-day workshop with the other 23 NSF I-Corps teams was one of the most intimidating experiences of his career.

Shah’s team attempted to find a process that would improve the testing of food in processing plants, improving the ease of finding pathogens and speeding the response to their discovery. “...we found out quickly that a rapid test in a food processing plant was not going to work since the current practice of sending samples to labs was not a problem,” Shah said. “Why rock the boat?”

The team then pivoted to a related market: the labs that actually performed the food testing for the processing plants. They found that speeding up the process was not possible, since the labs used bacteria that have a minimum culture time, and there isn’t currently another process for pathogen testing.

This meant that their ideal market, food processing and testing, was not as lucrative as they had hoped. The team’s value hypothesis had been invalidated.

The experience, however, would stick with Shah.

Bringing It Back to ESTEEM

“The lessons learned from customer discovery have been truly phenomenal,” Shah said in an interview. “All researchers desiring to commercialize their discoveries should learn this.”

Upon Shah’s return, David Murphy, Associate Dean of Entrepreneurship and the director or ESTEEM asked if he would put together a course on “Business Model Canvas” (the process Shah used at I-Corps) and Design Thinking.

Shah says that he has seen his course change the way that the ESTEEM students create business plans -- putting the customer first - and letting everything else follow - assuming nothing.

Shah even says that one startup has been formed as a result of his course this summer.  It is a student-led business aimed at helping new and current students find off-campus housing.  Using Shah’s Business Model Canvas, the founders identified that students were unwilling to pay for the service, but landlords were more than happy to pay to have their listings provided directly to potential student renters.

The next step, says Shah, is to build this way of thinking – utilizing the Business Model Canvas - into the DNA of the ESTEEM thesis, fundamentally transforming the cornerstone of the student thesis experience. Shah hopes that utilizing this model can help ESTEEM students find technology that is already being worked on at Notre Dame and validate its potential commercialization.

This, Shah hopes, will build a lasting connection for students in ESTEEM and elsewhere to understand the impact that their research can have in the real world, and to start thinking bigger than just the lab.