FitPetz, a startup company by ESTEEM students Daniel Collins and Finn Pegler, won a residency at the NestGSV incubator in Silicon Valley during the McCloskey Business Plan Competition at Notre Dame. The business plan reached the semifinals of the competition. 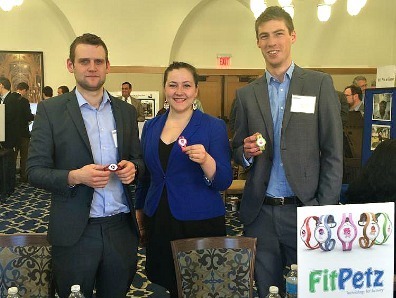 Collins conceived FitPetz, an application aimed at motivating children to more active play by linking it to their favorite videogames, for last fall’s Mendoza College of Business Ideas Challenges. Pegler, who has an engineering background, joined him. The team of advisors includes a computer science professor who has helped launch startups, a Silicon Valley advisor who runs a hardware accelerator, an engineering professor who has done product development and marketing, a Notre Dame research associate who is an expert at industrial design, and an anthropology major with insights on how to motivate children.

“We’re going to plan to keep going with the idea,” says Collins, who has accepted a job with enFocus in South Bend. “Finn is going to be working on it full-time over the summer at Innovation Park, building prototypes.” The team reprogrammed a Sony SmartWatch to act as their first prototype and are now working on building their own hardware.

FitPetz addresses the problem of childhood obesity by transforming young couch-sitters’ videogaming into a reason for playing hard. The activity tracker, a sort of smartwatch with a color screen, uses their personal avatar, and the company is working with videogame makers to build in opportunities to earn level-advancing gain points by playing outside.

“When the kid is more active, the character will be shown to be more happy and active,” Collins says. “When they’re less active, the character will be bored,” maybe sending a message urging them to go outside. “The more active the kid is, the more activity points they can earn to unlock new levels and gain rewards in games they enjoy. They’ll be able to gather these points by going outside. They can level up rather than just playing the game for hours.”

Collins and Pegler, who visited NestGSV with the ESTEEM class on the Spring Break trip to Silicon Valley, expect to use the residency when their product has reached a higher state of development.