Too often in STEM based academics we must blind ourselves from the real world. We pose rational arguments for allowable ignorance of the many inconveniences of reality. The complexity of the world around us is an ever-present challenge. We make assumptions to validate answers and answers to validate assumptions. Rarely do we manage to see truth through the chaos. However, this was the objective of 39 ESTEEM students these past eight weeks “To see truth through the chaos”.

The class: “Data Analytics” led by Prof. Robert Lewandowski. The cause: to save lives on the road of Indiana, a lofty but undeniably worthy objective.

The students were not without ample assistance in pursuing their cause. SAP, a long term friend of Notre Dame and giant in the data software world was on hand to help. ESTEEM students led by Prof. Robert Lewandowski and armed with the powerful data analysis tools provided by SAP set out to analyze nearly 13 years of road traffic incident data.

For the students, the class became far more that an opportunity to learn. Thanks to SAP and Indiana state officials, it became an opportunity to use the privileges of education to improve the world we live in. Few classes are so fundamentally attached to the core missions of both Notre Dame and the ESTEEM program. The students were motivated, the stakes were high and alongside the opportunity to save lives on the roads of Indiana came another unique opportunity. SAP offered ESTEEM students the chance to compete to represent Notre Dame, the ESTEEM program and the efforts of the class at SAP TechEd 2015 in Las Vegas, Nevada. 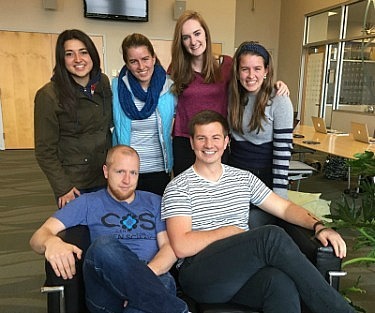 Work began in earnest on August 26th as Prof. Lewandowski led students through the first steps of using the comprehensive toolset provided by SAP. Little more than one week later, with the students on the cusp of diving into the data provided by the state of Indiana, the student were treated with a visit to the state office in Indianapolis. There the students met with the officials who were providing the class with the data vital to its cause.

Following the visit to the Indianapolis, work continued at a feverous pace. There were many obstacles to overcome - at times, it was hard to know where to look for the hidden truths. The students persevered, kept the cause in their hearts and prepared to present their findings to state officials.

During the final class on the 14th of October, as Notre Dame donned it’s Autumnal palette, Indiana state officials and police officers gathered in the home of the ESTEEM program, Innovation Park. Here, the story of more than a million rows of data and the thousands of injured and killed was set to unfold.

To begin proceedings, Major Michael White of the Indiana State Police provided a poignant reminder of the stakes involved. He asked all those in the room who lost a loved on the roads to raise a hand. Far too many hands were slowly raised. The excited bustle of only moments before was now replaced by an air of somber recognition. The first group of student stood up to speak to an expectant audience.

Many groups agreed upon some of the more obvious trends: Men are more likely to be involved in fatal crashes, rush hour produces higher rates of incidents, the importance of wearing one’s seatbelt, the Winter months are more dangerous and so on. However in several cases students were able to use the SAP tools to uncover less intuitive trends such as the dangers of owning a Chevy Cavalier, the benefits of rumble strips, the increased fatality rates on poorly lit roads, the increased fatality rate among youths and many more telling - and often - uncomfortable trends.

When all was said and done, Major White rose once again and thanked the students for their efforts and affirmed his intention to put the learning of the past eight weeks to work on the roads of Indiana. For the majority of the students the work was done and the future was to be in the hands of the Indiana state officials. For the six students travelling to SAP TechEd, the journey was not yet concluded. The fortunate six will carry the days of work, the late nights, the careful consideration of the entire class forward to SAP TechEd on the 19th of October. The students will no doubt grow and learn from the experience. However, as before there is a much greater cause; to carry the message of collaboration, technology and hard work united to find the truth through chaos and save lives.