Last summer, students in the ESTEEM Program were given a very unique opportunity to work with real-life entrepreneurs, Bob Brutvan and Matt Raymond.  On an emerging technology.  At a highly regarded research University and Medical School.  It was a process filled with learning – learning that continued right up to the announcement several months ago that the two entrepreneurs would not be pursuing the commercialization of the technology after all. 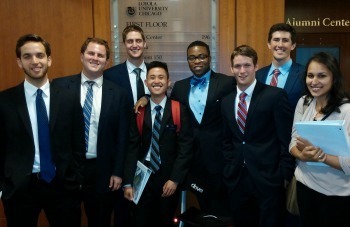 During orientation, students were presented with the opportunity to work on a clinical research database tool.  This 'Big Data' software tool takes exported Electronic Medical Record (EMR) data and allows medical researchers to run self-service queries to find groups of patients with similar disease specifics for further study.  It was already being used at a hospital in Chicago and – it seemed – there may be an opportunity to commercialize it, replicating it for use at other medical institutions.

Eight ESTEEM students were intrigued by the project and formed a team for their Business Model Canvas class to assist with the customer validation aspect of this fledging opportunity.  In just six weeks they conducted over 80 interviews – in order to determine if there was a market for the value proposition CRDB offered.

By the end of the summer, the future of the project looked promising.  Countless interviews including some with senior leadership at prestigious Academic Medical Centers revealed that the market was ripe for this type of technology.  However, it was time sensitive.  The entrepreneurs were aware of the field and knew that the market was crowded.  After the ESTEEM students’ hard work, the entrepreneurs felt that the project stood a good chance of success if they struck while the iron was hot.

Unfortunately, the challenges of University Tech Transfer slowed down the process.  As with so many exciting research ideas several academic institutions were involved and the question of licensing was unable to be resolved.  In the end, serial entrepreneurs Bob and Matt felt that the brief window to scale the project had closed and they decided to move in a different direction.

Yet, what an opportunity for our students and for ESTEEM! For these students to interact with serial entrepreneurs with tremendous business savvy and experience!  For them to access emerging technologies and speak with senior leadership at hugely successful academic institutions!  And – in a way – they experienced their first “failure” (albeit tangentially) as they realized how difficult and cumbersome the licensing of University technologies can be.  While some may see that failure of the project as a failure to launch, we see it at as just another one of the unique and tremendous learning opportunities available through ESTEEM: the opportunity to perform customer validation, work with real-life entrepreneurs, fail early and be ready to pivot when necessary.