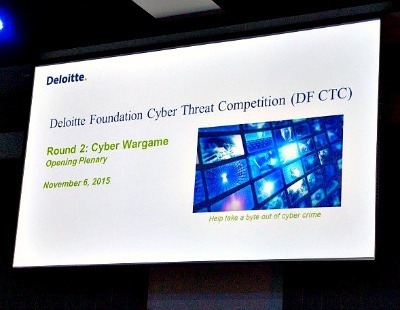 With the Notre Dame team of three (Ajay, Nick, and myself) chosen by a set of online challenges, were travelled to Deloitte University (DU) near Dallas, Texas, for the final round. The competition consisted of one of Deloitte's cyber wargames; we were curious to find out exactly what that meant. We were greeted with a tornado warning but thankfully this passed without incident! Our table coach, Ryan (who we had met previously through the recruiting process) gave us a tour of the fantastic facility. DU has a fully equipped gym, conference and classrooms, and comfortable guest bedrooms. We had dinner at 'The Market', the DU dedicated restaurant where excited discussion ensued about the competition to come with the other thirteen schools. 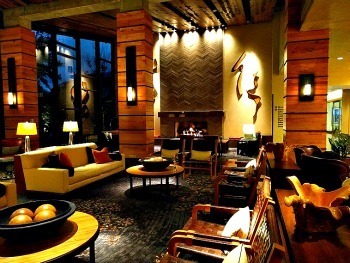 The competition kicked off early Friday morning (after a delicious breakfast) with a twist. In the unfolding simulated cyber-attack, there were first a few rounds of trivia. Here, teams who scored well received fake money with which to purchase in-game powers such as legal advice. The body of the wargame had each team represent the cyber response team to an increasingly complex attack on the client company. The attention to detail was amazing, with items such as emails, blog posts, and even a television news item (projected onto screens around the room) made available. Teams scored points by preparing appropriate responses to each level of the attack. The competition therefore required a background of technical knowledge in terms of networks and security but also sharp business acumen. In addition, halfway through the incident we had to brief the fictional chief of staff on the situation.

The wargame was intense, and over before we knew it. We had three hours to prepare and practise a presentation to be delivered the following morning, incorporating all we had done so far to combat the hacking attempts and what the CEO should do going forward. After dinner that evening, we made our way to ‘The Barn’ (which I’m fairly sure was an actual barn at one stage) where everyone at DU could unwind. Here, Deloitte’s people-focussed culture shone through, where professionals met old friends, sought to network, or (in my case) played Jenga over Texas barbeque. 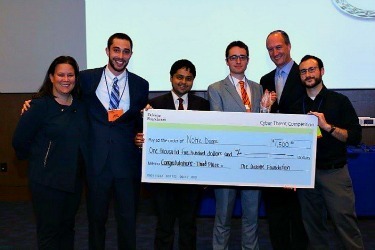 On Saturday morning, each team presented to the C-suite of the attacked company. We were still in full simulation mode, introducing ourselves as being from the cyber response team. They asked some tricky questions – it’s obviously a skill of a good consultant to think on his or her feet! The remainder of the morning was spent packaging hygiene kits for people who had lost their homes to natural disasters, which was a socially impactful way to make use of all the available student manpower! The whole event concluded with an awards ceremony, in which we were fortunate to place third, even though this was the first time Notre Dame was represented. Needless to state, we were having a blast even before the announcement. With this fantastic professional experience at an end, it was time to fly back to South Bend and continue the semester (naturally getting stopped by security to examine the dense crystal trophy!).