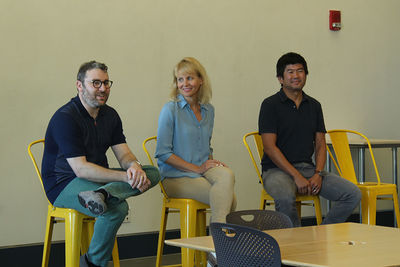 For this week’s Lunch and Learn, Matt Rogers, the co-founder of Nest and Incite, returned to Innovation Park with a special guest panel.

Accompanying him this time around were his Nest co-founders, Amy and Shige Honjo, a married couple who are close friends with Matt and joined Nest at the early stages. Shige worked with Matt at Apple before he was recruited to drop his day job and become the second employee, and cofounder, of Nest in 2010. Shige jokingly added that for his first job assignment, he was tasked with going on Craigslist to find furniture for their workspace, ironically a typical Silicon Valley startup garage. Amy joined the team soon after, starting as a cofounder (and intern) at the company after a winding career in physics, software and consulting. After grabbing a bite of the Chicory Café provided lunch, the Nest veterans hosted a question and answer session with attendees.

The first round of questions centered around what it was like for Amy and Shige to work together as a married couple. After all, what would often be referred to as an HR nightmare seemed to work out pretty well for them. In response, Matt highlighted that they weren’t the only ones who were related in the original Nest team. Of the first 30 employees at Nest, he explained that there were three sets of married couples, three sets of siblings, and even a father/son pair. Amy then went on to highlight that, in her eyes, relationships are actually what built the company. She said that trust and open communication are the most important aspects of a well-run business and going to the same home at the end of the day, or even just enjoying your time with coworkers, is one way you can ensure that these qualities are present.

Another interesting question was on the topic of running into problems in an early stage company. Matt, Shige and Amy all shared that they each had their fair share of struggles, but used a combination of preparation, networking, and luck to get through them. One example of this came from Amy who highlighted a situation where two weeks before the launch of their first product, the packaging vendor pulled out. Rather than panic and lose all hope, Amy quickly contacted a different vendor with whom she had cultivated a positive relationship, and they luckily agreed to help out. She explained this goes to show that luck is needed in any startup situation, but it must be accompanied by hard work and good business practices.

Other highlights of the Lunch and Learn included Amy emphasizing that when it comes to marketing, you can’t just rely on logic. Rather, “you gotta have some soul!” Shige also commented on a few students’ fears to jump around to fields in which they have no expertise, highlighting his own mentality: “If a human being invented it, I can probably figure it out.” In other words, just go for it, take a risk and learn along the way. 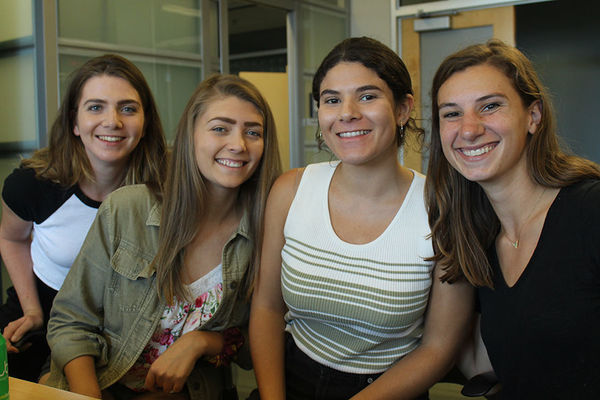 As for what the team is doing now, Matt is living in South Bend working with his wife and the Incite team on Mayor Pete’s presidential campaign. Amy and Shige are taking a well-deserved break and getting ready for what will come next.