Every year, the ESTEEM class takes on a Legacy Project, where students get involved with a charity and help them fundraise. This year, ESTEEM partnered with the Ara Parseghian Research Medical Foundation, a non-profit dedicated to funding medical research to find a treatment for Niemann-Pick Type C disease - a genetic, cholesterol storage disorder that primarily strikes children with death occurring before or during adolescence. Ara Parseghian was a beloved coach at Notre Dame, who lost three of his grandchildren to this terrible disease.

To raise money for this foundation, ESTEEM students took on a four day bike ride consisting of nearly 400 miles. The ride started at Miami University, where Ara Parseghian was a coach. We were hosted by Miami University's President Gregory Crawford and his wife Renate Crawford, who started both the bike ride as a fundraiser as well as the ESTEEM program. From Miami University, a group of eight ESTEEM cyclists headed to Indianapolis early Monday morning, with the help of an amazing group of leaders, Destination Cycling. 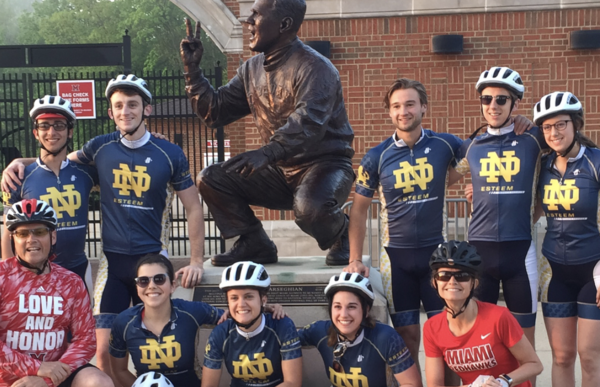 Those not riding that day patiently waited in Indianapolis at the Creighton family’s home, our host family for the night, for the riders to be cheered in upon arrival. That night, there was a fundraising event which brought together Notre Dame alumni in the area for drinks and dinner. The next morning, another eight cyclists took on the journey from Indianapolis to Lafayette. I was riding on this day, and it was a very challenging day. From having half the cyclists collide, broken bikes and popped tires, to even a heavy rain downpour, this day was not a smooth ride. However, these unexpected delays led us to visiting a female retirement home, which was the highlight of everyone’s day, and maybe even the highlight of these women’s week.

The next group of cyclists took off Wednesday morning from Lafayette to Chicago. These cyclists had the longest leg with 103 miles. They were welcomed by a very loud group of cheering ESTEEM students at Millennium Park in Chicago. That night, there was another fundraising event where Notre Dame alumni gathered to celebrate the cyclists, but most importantly to support the Ara Parseghian Foundation in the fight for a Niemann-Pick Type C cure. With both fundraising events and ESTEEM students fundraising efforts during Notre Dame day, the fund was able to exceed its goal of raising $150,000. 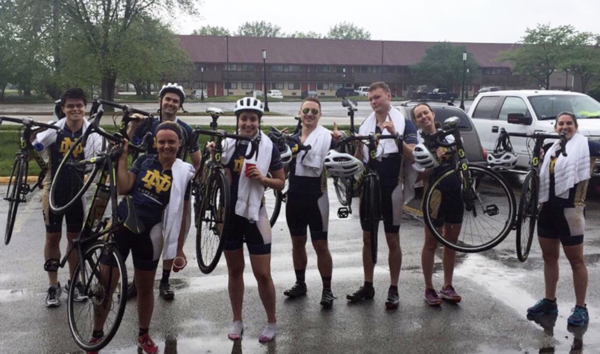 Finally, it was time for the cyclists to return home to the Dome, and cycled from Chicago to Notre Dame. Here they were welcomed by ESTEEM staff and there was a champagne celebration outside of main building. We were even fortunate enough to have an appearance by President Father John as he congratulated us on our journey. This trip was an amazing end to our time in ESTEEM together, and we all had so much fun riding and traveling together for these four days. However, the true joy came from knowing that our body soreness and road rash gained from this ride is making a difference. Whether this money finds the cure or not, we know that it is not only advancing the science to eventually reach the cure, it is also providing hope for those families being affected by this disease. 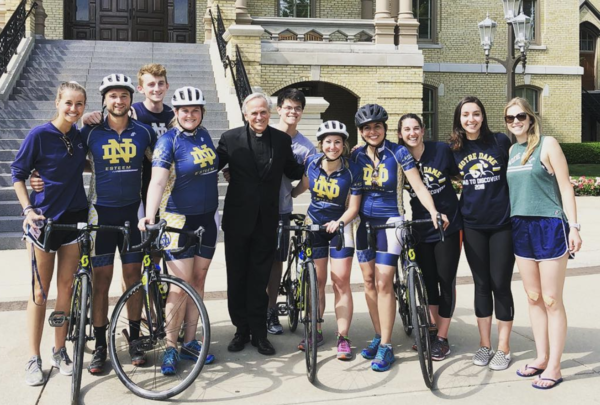 We are extremely grateful for all those who have supported us throughout this journey and we ask that you continue to provide hope for those affected by Niemann-Pick Type C by supporting the Ara Parseghian Research Medical Foundation.