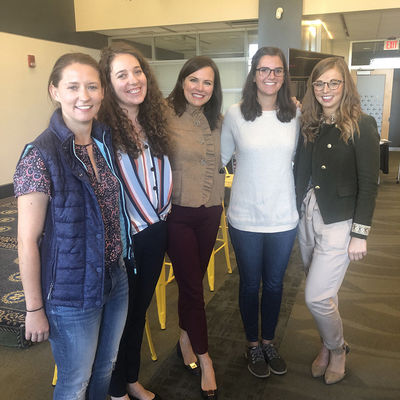 As Women’s Entrepreneurship Day approaches, many of us here at ESTEEM are looking back on the coffee session and panel that was hosted at Innovation Park on October 14th. The Women in Entrepreneurship Event and Leadership Panel welcomed back five Notre Dame alums, three of which graduated from the ESTEEM program, to talk about their experiences as women in the world of entrepreneurship. Hosted by Theresa Foley, the panel allowed for a quick introduction of each woman as well as a series of set questions about networking, mentorship, and unexpected challenges. After the Q&A, the audience was given a chance to guide the remainder of the conversation.

The first question for the panel, on how to go about networking, was received with a lot of understanding. Abbey Santanello, an ESTEEM 2016 graduate, Co-Founder of Vampiro, and current medical student, was the first to answer. She expressed that the key to networking is simply being open. Her best advice for the students was to always carry a business card as well as a 30-second elevator pitch as you never know who you’ll run into on the street. Maria Gibbs, a 2017 Notre Dame graduate and Co-Founder of INVANTI, offered a more structured approach. She explained that as an introvert, she understands networking on the spot can be difficult. So, she goes to LinkedIn first, finding mutual connections that she is interested in speaking with and then asking that person if they’re willing to make a soft introduction. This smooths out any nerves she might have about the process, making it much more productive.

The next topic for the panel was mentorship. Dr. Foley asked the panel, “What is the best way to find a mentor?” and “What qualities should you look for in this person?” Amy Flanagan, a 2015 ESTEEM graduate and current Bain consultant, had a few insights on this topic. She explained that for her, finding a solid mentor was a top priority coming out of school. She knew that, especially as a woman in a male-dominated field, she needed someone who would not only support and advocate for her, but also challenge her to be better. The best advice she offered was to look for people with which you share similar values. She explained that these people will often take you with them when they start to move up in their career. Arielle Gannon, a 2017 ESTEEM graduate and Founder of TeacherCODE, added to this statement, sharing that you should pick a mentor with whom you are willing to share your full self. She went on to explain that, “your mentor is only as good as you take them on board.” Another woman who gave advice on this topic was Susan Ford, Notre Dame Executive Management Certificate Graduate, South Bend resident and Founder/President at SEMMA Health, Inc. She expressed that rather than relying on just one person as a mentor, you should build yourself a board of directors, that is, a group of people from multiple backgrounds who are all invested in your success. She explained that this variety of stockholders in your career can allow you to get feedback from multiple angles and prevent any one person from being burnt out.

As the panel came to a close, the panelists were asked to provide closing thoughts and final pieces of advice. In response, Maria Gibbs shared a series of things she’s learned over the years: “Follow the things you are curious about. Follow your passions. Do what you care about. Take time to invest in your friendships. Spend time with people and be vulnerable.” Arielle Gannon also shared a few bits of advice. She encouraged the attendees to constantly seek out opportunities that will challenge them. She explained how her experience in ESTEEM taught her how to solve hard problems. Moving forward, it is important to be open to opportunities that will push you beyond your limits.