Nick Machesney is a current ESTEEM student - and one of the captains of ESTEEMs first-ever Broomball team.  Below he reflects upon their experience.

After missing the opportunity to show off their athletic prowess in the indoor soccer league, over half of this year’s ESTEEM class joined forces to take on Notre Dame’s intramural, co-ed broomball league.  Relegated to the ll pm time slot on Tuesdays, we knew some of us would be up past our bed times but we entered the season determined that we could bring home some championship hardware for the program. 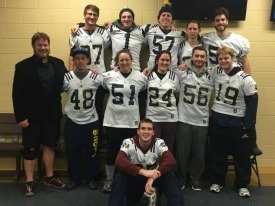 Brimming with confidence, Team “ESTEEM-A Team” entered Week 1 ready to kick some ice, but fortunately for the rest of the league we were awarded a week off to start the season.  By the time Week 2 and our first game came along, we had realized that only two of the seventeen of us had ever played broomball or even learned the rules.  Nevertheless we gingerly walked out onto that ice steadfast on getting the W.  “Team Penthouse Mafia” quickly reminded of us our inexperience during the first half and despite rapidly ascending the learning curve in the second half, we unfortunately lost our first game 3-1.

Once Game 2 rolled around we were primed and ready to dominate.  The empty arena and one ref could easily see our night-and-day improvement from Game 1 and ESTEEM prevailed in a high-scoring 6-4 win as we said “No Way!” to Team “Snow Way.”  Game 3 once again saw Team ESTEEM running circles around the other team out on the North half of the Olympic South Rink at the Compton Family Arena.  The ladies in net had a game-for-the ages and finally got that illusive shutout as we beat Team “Pimp My Zamboni” 3-0.

Hesitant to get too complacent and overlook our last opponent, ESTEEM-A Team went into the final week of the season completely focused on two things: our thesis projects and beating Team “Snow Dogs 3: Snowception.”  Unfortunately there goalie gave up snow goals and ESTEEM went down 0-2, narrowly missing the playoffs.

Despite the disappointing loss and early exit before the playoffs right as we were finding our stride, getting out of the building as a class was a lot of fun and a nice way to get a break from the classroom.  Four of the ESTEEM team members even enjoyed broomball enough to join St. Ed’s University-wide Charity Broomball Event where they went 5-0, winning the tournament and the championship mullet wigs.

Looking ahead to the spring, the ESTEEM class is excited to get out on the pitch again as a class!