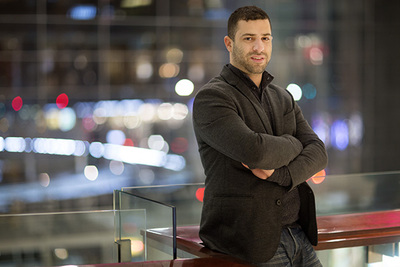 Will McLeod, who holds three degrees from the University of Notre Dame, was named to the FORBES 30 Under 30 in Manufacturing list. McLeod, who co-founded SmarterShade Inc., a patented smart-glass technology company while he was an undergraduate, is now Chief Of Product at Keen Home, an Internet of Things startup in New York that he cofounded.

The program includes a summit of this year’s honorees in New York on January 28 and social media connections for people who have been on the list over the years, providing an opportunity to network with others in the field. “It’s been interesting to be part of that list,” McLeod says. An international list will be announced in August.A panel of judges selected the manufacturing leaders after an interview with nominees. Judges were Craig Maxwell, Vice President of Technology and Innovation at Parker Hannifin; Eben Bayer, CEO of Ecovative; Jenny Lawton, Chief Strategy Officer of littleBits; and former NASA Astronaut Leroy Chiao.

McLeod received a Bachelor of Science degree in mechanical engineering and a Bachelor of Arts in product design in 2009. He was involved in Four Horseman Ventures and the Industrial Designers Society of America. McLeod joined the inaugural Engineering, Science, & Technology Entrepreneurship Excellence Master’s (ESTEEM) Program class, where he worked with then Dean of Science Greg Crawford, a recognized leader in the optics field. He graduated in 2010.

SmarterShade, whose smart glass can switch between clear and opaque on command, was founded with Ryan Tatzel in 2007. It was the first team composed of undergraduates to win the prestigious McCloskey Business Plan Competition at Notre Dame’s Mendoza College of Business. The firm, which won an NSF grant to take the concept to production, received three U.S. patents in 2012. It is now run by Tatzel and Michael Stacey.

In 2013, McLeod co-founded Keen Home, a home automation products company with Ryan Fant and Nayeem Hussain. The company, which received seed funding in 2104, won an NSF grant, and struck a deal on Shark Tank in February 2015 at record valuation for a tech firm.

Keen Home first produced a wirelessly-operated HVAC vent that provides automatic room-by-room zoning for heating and cooling and is sold at some 600 Lowe’s stores. The company has added a smart air filter and is developing a comprehensive Home Health Dashboard that leverages sensors in the house to alert homeowners to potential problems.