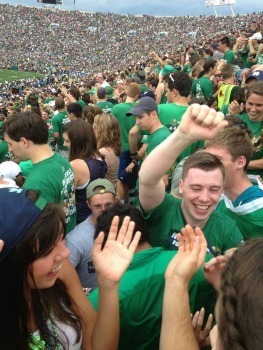 The following is a brief reflection on the ESTEEM Program Year by Ciaran Murphy who joined the program as a Naughton Fellow. Ciaran moved here from his native Ireland in June of 2012 and will be returning there in just a few weeks to take a position with the Glen Dimplex Group where he will be a Business Associate working out of their R&D Centre in Dunleer, Co Louth, Ireland.

May 17th marked the conclusion of our journey as students at the University of Notre Dame in the 2013-2014 ESTEEM program. The three other Irish lads and I arrived in South Bend on June 23 last year, almost 11 months ago, and the time has slipped by all too quickly. From the first time I set foot in the Greenhouse with my classmates, I knew coming to Notre Dame was the right decision. It meant living away from home for the first time in my life, and for someone from Cork, that was very difficult! It meant swapping hurling for American football, the Republic of Telly for the Colbert Report, and hot chicken rolls for Five Guys. 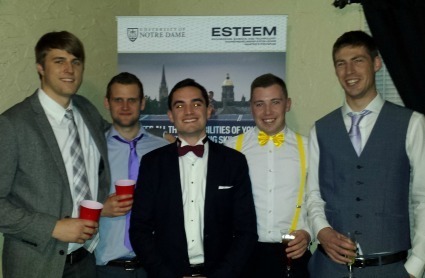 Some of my fondest memories go back to those early weeks when we all got to know each other. I feel a lot of us really bonded in our first few nights out in Brothers, and during the summer, we had a lot of those nights out despite our early morning classes. The Irish house wanted to embrace U.S. culture, so we organized a July 4 party for our class, although we had no experience with fireworks in Ireland and wound up with the rockets casing everyone – but our classmates were understanding. The summer semester introduced us to some very interesting characters, including Sunny Shah, now an Assistant Director of the Program; Kerry Wilson; and the one and only Hutch.

Relationships are such a central part of ESTEEM. Our house on Notre Dame Avenue somehow became party central for the class, with many nights starting, and some ending, in our front room. As a class, we talked, argued, wrestled, danced, sang, and became Olympians in that room, and some of the deepest conversations I have ever experienced occurred there. I have made more close friends in just one year here than 18 years of school and college in Ireland.

Our Spring Break trip to Silicon Valley was a highlight of the year, completing the bonds for everyone in the class. It was a hectic week, but the people we met there made sure it was always interesting. None of us will forget our chat with Czech Consul Richard Pivnicka in his garden where told us about his first bronze statue. 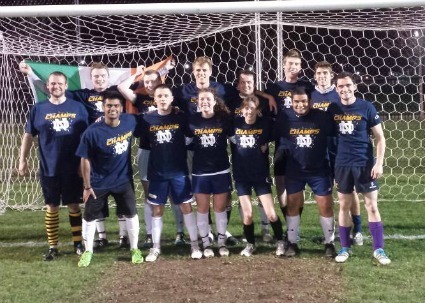 After Spring Break, attention turned to the Graduate Student Soccer Tournament. Many members of the class formed a team, led by Captain Alysha Thomas, with a balance between watertight defence and a dangerous attack. The ESTEEM Dream Team won the championship game 1-0 on a score by Finn Pegler and took home coveted RecSports Championship shirts.

The next step means we are going to be scattered to the four corners of the globe, and many of us don’t know what lies ahead. No matter what, we will forever be linked by the bond we shared this year, where we learned from ESTEEM to keep chasing our dreams no matter the obstacles.

Finally, I want to thank all the people who made this year such a success. To David Murphy, our Level 5 Leader, I cannot think of anyone better placed to make ESTEEM a success. You steered the ship for the year and did a stellar job. To Lynette Prezyna, you have the patience of a saint. All the time you spent helping us with our thesis projects is greatly appreciated. To Sunny Shah, you transitioned from Professor to Assistant Director this year, and we greatly enjoyed working with you. Your inclusion of students in trying to shape the future of the program displays great foresight and will yield great benefits in the coming years. To Susan Morris, you have been ever-helpful since your arrival, always there when we needed help. Finally, to Rebekah DeLine. If anyone ever needed the inside scoop on what’s going on in the class, you were the best port of call. You took an interest in the students in a very personal way, and that made all of us feel at home. You took on the role of big sister for all of us, and I would like to thank you for that.

This poem by Irish poet William Butler Yeats talks about friendships that endure through time, as I believe ours will:

Though you are in your shining days,
Voices among the crowd
And new friends busy with your praise,
Be not unkind or proud,

But think about old friends the most:
Time's bitter flood will rise,
Your beauty perish and be lost
For all eyes but these eyes.