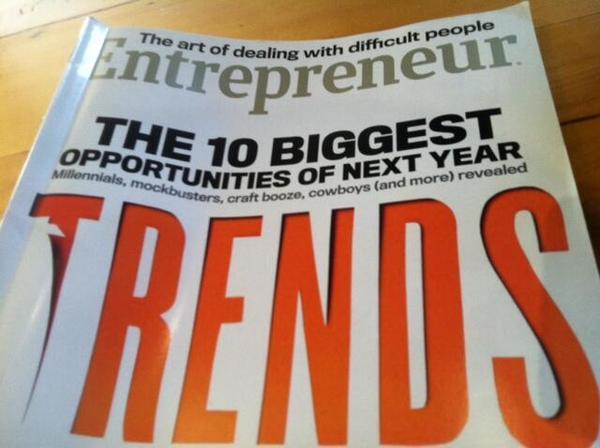 Entrerepreneur Magazine, in the December issue of their periodical, devotes a healthy portion to discussing what ideas, places, concepts, and things will be popular and trending from a marketing standpoint in 2014. Entitled “The 10 Biggest Opportunities of Next Year,” the cover article highlights all that which a budding innovator might think of investing their time and capital in as the clock turns over and a new set of days and months begins.

These opportunities seemingly run the gamut, from the emergence of the nation of Brazil as an economy in which to invest in to the “rise of the mockbuster,” which are cheaply made movies piggybacking on the success of more popular, and far more expensive, Hollywood blockbusters (“Transformers” becomes “Transmorphers,” for instance).

One interesting trend the magazine draws attention to is the idea of crowdfunding not for an actual business idea or model but lining up investors for åoneself, via websites like Upstart, which “lets people raise money in exchange for a small share of their income over 5 or 10 years.” This is certainly a novel concept and one that allows a young entrepreneur to retire some of the things that might hamper them as they are starting out, like their student loans, for example.

Covered elsewhere in the media by respected entities like Forbes and Wired, Upstart looks to, along with the similar websites like Pave, give recent college grads with stable credit histories a leg up as they strive to find their passion and purpose in the world. Most of these graduates appear to want to make their way in the world of business. According to the article…

“Since Upstart’s launch last November, backers have made $2 million in offers to 160 people. “At least, 50 percent are entrepreneurs specifically trying to get a business off the ground,” says CEO Dave Girouard.”

While more traditional types in the business world might eschew using such a way “to get a business of the ground,” between platforms like this and the omnipresent Kickstarter, it’s hard to debate that we haven’t entered a new era, where all the “power” isn’t held by those handing out the loans but shared by those who are willing and want to invest in someone else and their ideas. The fact that one will most likely be rewarded for such an investment also certainly doesn’t hurt.

What do you think of someone “crowdfunding themselves”? Is it proper to go the more traditional route or has the paradigm shifted in this regard? Would you ever think of investing in someone via Upstart or Pave?